Back in the 1980s, when I wasn’t watching bitchin’ Madonna videos on MTV, I became aware of the saying “You can have it all.” To young women like myself, this meant there was hope, and even some expectation, that as we moved out into the real world, and started our careers, we could juggle an exciting job, marry a great guy, pop out a couple kids, and remain gloriously happy and sane, all while sporting our shoulder-padded suits and big-ass hair.

We were told we could push aside the outdated model of motherhood that many of our own moms had succumbed to – staying home to raise a big family while Dad went out and earned the paycheck. Because, as that old Enjoli commercial schooled us, we could “Bring home the bacon and fry it up in the pan, and never let our husband forget he was the Man…”

When I did eventually become a mother and had two small, screaming children, I suddenly grasped the realization that “having it all” was actually not going to work out quite the way it did for that sultry boss of a woman in that annoying commercial. I’d been lied to. It was all bullshit.

First of all, I didn’t have a job that paid well enough to afford childcare for two kids, and we lived too far away from any family members to lend us any help. At least for a while, I’d be staying home and only making that bacon, not bringing it home.

As I struggled on the daily to simply stay afloat with laundry, cooking, and preventing my kids from sustaining serious injuries while remaining somewhat sane, I marveled at the women I knew who still worked full time and raised kids. How were some of them managing to have it all, while my own life seemed like a shitshow (literally) on most days?

The Big Secret was that they weren’t actually having it all – at least not all at once. Everyone was sacrificing something. Either cutting back at work or spending less time with their kids than they wanted to, or paying a crap ton for childcare, or a housecleaner, or getting help from grandparents or siblings. Or actually going a little fucking insane.

And finally, it seemed like the myth of having it all (at once) was busted.

So, it’s rather ironic that we’ve raised a generation of kids who get to high school and fall right into the same trap. A large number of us parents allowed them, in fact encouraged them, to jump on the crazy train of trying to “have it all” in the hopes of killing it in high school to get into the selective colleges that we as a society think will be a golden ticket to success.

For years now these kids have been stressing about having a college application that “has it all.” They need the perfect GPA and the near perfect test scores. They need to be the President of some club and play a varsity sport. They need to volunteer all the hours for community service and have a part-time job. Oh, then in their spare time they need to start a non-profit or win a state-wide science or musical instrument competition. All while having fun! and looking hot! and having at least half a thousand followers on Instagram. Ummm…WTF!?

Just as we discovered that something’s gotta give when it comes to motherhood and having it all, we need to help our kids with this same exact realization.  We need to gently rip them off the high school hamster wheel of ridiculous expectation and stress. We need to help them not compare themselves to a Kardashian or a professional athlete or some other radiant human hawking make-up or fat-burning juice cleanses. Because it’s causing many of them real harm. Their rates of anxiety and depression are legit worrisome. They are coping with all this pressure through self-harm – vaping, cutting, disordered eating, and other methods of self-inflicted stress “management.”  Perhaps we ourselves have somewhat forgotten that young and idealistic minds think they can perchance have it all.

Maybe out there somewhere is that .02% of Moms who somehow, someway, manage to have it all at once and remain stable. And maybe there’s that same minuscule number of teenagers who do have a Pinterest-perfect existence and excel at all the things. But I don’t know any of those people, so I’ll never hold my standards, or my kids’, up to that level. Plus, it’s mostly filters, photo-editing apps, and selective posting that do the real work, anyway.

Motherhood is stupidly messy and, on some days, infuriating and horrible. Ditto that times ten for the teen years. Do what you can, screw the rest – and enjoy having just some of “it all.”

And if anyone still has any Enjoli perfume hiding out in a dusty drawer, toss that shit out immediately. 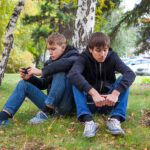 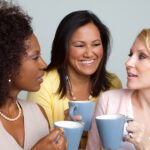 The ABCs of Mom Groups