One of these days, my family of three (soon to be four!) will move out of our tiny apartment and get a house. Until then, we’re stuck with all the joys that living in close proximity of neighbors (also known as “people trying to pretend they’re normal when they’re really crazy, annoying weirdoes”) brings.

This project has been going on for weeks. What the heck are they doing? You’d think most of the drilling would be focused on 2-3 intense home improvement days and then they could PUT THE BLASTED THING AWAY.

2. Shouting in the hallways

Canyons have quieter echoes than our hallway. I don’t know how anyone can hold a conversation with the cacophony, but they certainly try. And they raise their voices to compensate, which only makes it worse. Can’t the “What are we having for dinner?” conversation be postponed 2.4 seconds until they’ve entered their apartment?

3. Taking forever to open their door

When I first moved in, I admit I had some trouble with my antique key. It looked better suited to locking away King Joffrey in a dungeon (hey, one can dream) and took a while to get used to. But how can my neighbor STILL be having problems with his key? Every night it’s the same jingle-jangle for five minutes.

My real problem is I’ve had a fear of dogs since I was a child and the jangling of keys sounds like a dog on the loose. Even within the confines of my apartment walls, I still fear the rabid animal that is going to attack me.

Were they born in a barn? I should applaud their efforts to dispose of their trash in the proper place but I’m not handing out awards yet. Open the chute, insert the trash, and close it. No need to slam it or, worse, let go of the handle so that it slams even more loudly and reverberates in the hall for hours.

This inevitably happens when I’m on the way home from the grocery store, loaded up with numerous bags that are forging lines into my palms. Two neighbors will be chit-chatting in the hallway, blocking the stairs. There’s no way they didn’t see me and for sure they must have heard me say “Excuse me” 100 times. But they just ignore me until they’re done with their conversation.

But then God forbid I get a new stroller and can’t figure out how to fold it up and so I’m taking up half the hallway, inventing toddler-friendly swear words as I go, and then one of these neighbors comes home and huffs and puffs that I’m blocking the way. First, I’m NOT blocking the way because I thoughtfully pulled my chaos off to the side. Second, do they not remember doing the very same thing that morning?

In all fairness, I have to admit the things I do that must annoy my neighbors:

1. I go to the bathroom at all hours of the night. Thank you, pregnancy. And thank you, thin walls. I can hear my neighbors pee so I’m sure they can hear me.

2. My 20-month-old son’s favorite hobby, aside from vacuuming and listening to the same song on repeat, is banging on pots and pans. Especially at 6 in the morning.

3. And from back in my partying days, I can’t even begin to list all my offenses. But probably the worst is ABBA’s Greatest Hits karaoke on repeat.

Maybe let’s just agree to call it even? What annoying things do your neighbors do? 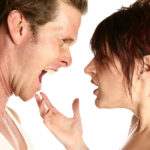 The Worst Bedtime Story of All Time 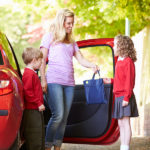 Binder Sniffing and 6 Other Reasons We’re Overjoyed for Back to School Season!