Being the mom of a child with autism feels like a bigger, more intense series of mood swings than PMS could ever dole out.  Sometimes the feelings change from day to day or even minute to minute.  Other times one of the emotions settles in and starts to unpack bags, determined to move in and redecorate the inside of my head.  On a regular basis we have a family reunion of the feels and they all show up in my heart holding casserole dishes and talking loudly as they mill about and talk about me like I’m not there.

I think that other moms have these moments of mood changes as well, but I am guessing that they aren’t always as intense or unpredictable.  I’m also assuming that they don’t actually name their moods and want to draw them as characters either.

When Maggie is happy, the people around her have no choice but to feel it.  She flaps her arms and squeals with joy.  And that smile.  Who could resist that smile?  This is often when she chooses to make eye contact too – the other time is when she is asking for chips and wants to show you that she means business and you’d best heed her warning stare and hand over the goods.  The eye contact and the snuggles are the most heart-warming moments.  Many tweens won’t even acknowledge their moms with more than a head nod or a text message, and mine still climbs in my lap and smothers me with kisses.  How could I feel anything but happy?

Mama Bear announces herself claws-first.  She is who I count on when there is a program that Maggie can’t get into and when I hear other kids making fun of her.  Mama Bear is strong and protects Maggie from the world and from danger.  Mama Bear stops her from running into the street, and wrestles her into her coat in the winter.  She protects Maggie from getting hurt during a meltdown, and she could probably lift an 18-wheeler at times.

This woman just never knows when to go home.  She is the roommate I never asked for.  The restraining orders don’t work.  She stays.  She worries if we are doing the right therapies.  Are we pushing Maggie hard enough?  Are we giving her enough down-time and letting her be who she wants to be?  She stacks up books on my nightstand, and makes me feel guilty for letting them collect dust.  She sits up listening for noises and lives in constant fear of the day she slips up and Maggie runs away or gets hurt.  I hate Annie.  But she is also necessary.  She lights the fire under Mama Bear.  She thinks of things ahead of time, preventing tragedy.  She will always be here.

Frankie doesn’t understand why the waitlists for services are 3 years long, if the service even exists at all.  Frankie wishes the house wasn’t a constant disaster from chasing Maggie from one mess to another.  That stage that all kids go through at 2 years old when they pull out every single thing in the cupboards and throw half their dinner on the floor is still happening at 9 years old.  When it’s a stage it is a little easier to deal with.  You can see the light at the end of the tunnel.  When the light has a train attached to it, it’s frustrating.  And tiring.

Fairness Fran goes out in public with us a lot.  She likes to point out all those nice families who are doing exotic things like watching the school play together instead of choosing which parent gets to go, or worse…all going, and then watching those families stare while we make a scene.  Fran also hates seeing people’s babies be able to do things that Maggie still can’t do at age 9.  Sometimes Fran silently curses the parents of these adorable babies and wishes horrible things on them.  I’m ashamed for Fran.

I like Hopeful Hannah.  I try to keep her around to scare off the others.  No matter how badly things are going, she convinces me to try that one more therapy, or she tells me that of course that trip to the movies is not going to end in disaster on a scale so epic that it can’t even be measured.  Everything will be fine and we just have to keep trying.  Without her around, we wouldn’t leave the house.

Defeated Donna makes Debbie Downer look like a cheerleader on red bull.  She typically shows up after a particularly traumatizing trip to the grocery store, or on the way home from an IEP meeting.  She often wants to stop for ice cream and then spends a lot of time lying on the couch feeling like things are just never going to be okay.  Donna thinks about the future a lot.  She also hates Hopeful Hannah for lying to her, and kind of hopes she chokes on her pompoms.

Gretchen reads the articles that float by on Facebook every week about the latest discovery of what causes autism, and as much as I try to brush it off and explain it away with my fancy psychology minor, she feels devastated.  She replays every moment leading up to the diagnosis and questions each one.  It doesn’t matter that Maggie has a twin sister who does not have autism… surely I must have done something wrong.  Gretchen feels like a failure for not trying every possible therapy to make Maggie’s quality of life better.  And then she feels guilty for thinking she needs any change at all.  Gretchen meets with Annie regularly and they discuss their feelings about what could go wrong, what did go wrong and is my fault, and they wrack their brains for a possible explanation as to why we haven’t gone on the GFCF diet yet or met with any politicians.  Gretchen knows I’m not good enough, and she tells me every day.

Autism moms often talk about how lucky we are in some ways.  When our non-verbal kids say a new word or a sentence that wasn’t a line from Dora we celebrate it like most people do on the day their child takes her first step.  We get to have these “firsts” stretched out over a longer period, and we know how hard our kids have worked to get there, so it rarely goes unnoticed.  With neurotypical kids the day-to-day changes are not dramatic and there’s no celebration of a four word sentence.  Grateful Gracie appreciates these moments and makes sure that I notice them.  They are like energy boosters, and they keep me going over the long haul.  They get Defeated Donna off the couch.  Gracie also reminds me how lucky I am to have 3 beautiful and healthy daughters and a husband who is a complete partner, and who knows how to show the unwanted moods the door when I’ve had enough.

They always said it takes a village to raise a child.  But who knew that village would all be inside my head? 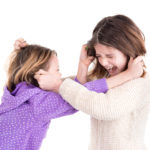 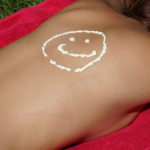 What’s So Bad About Baring Our Bods?