My youngest son was 4 years old before he could call me “Mama”.  I waited six years before I heard him imitate the words “I love you”.  He was 8 when he could tell me “knee hurt” which didn’t really mean his knee hurt…it meant SOMETHING hurt.  And he was 10 years old the first time he told his older brother “fuck you” after being punched in the arm for barging into the  bathroom unannounced.
Yes, I consider my kid dropping the f-bomb on his brother a milestone.   My now 11 year old son has Autism and a severe language disorder. If he were ever lost, he could not communicate clearly enough that a stranger would understand his name or how to help him get home. While there is never a moment I am not mentally tormented by this idea, the upside is that he would be able to give that stranger a succinct piece of his goddamned mind. So there’s that.
I have always held the belief that words are powerful and not powerful all at the same time.  My oldest son will catch way more hell if I find out that he has made fun of someone or verbally manipulated me than if he were to toss out a “sonofabitch” for emphasis.  When he was two, I dropped a brand new bottle of organic vanilla on my travertine tile kitchen floor. It hit the ground, shattered crisply and the brown liquid immediately began seeping into the porous stone.  My little cherub promptly looked up from what he was doing and said “Shit. Shit.”
“Great.  He said it twice.  Are you happy now?” my husband said more as a statement than as a question.
It wasn’t a matter of being happy. My toddler simply expressed an adequate level of empathy over the senseless destruction of a $17 bottle of frivolity. And frankly, he nailed it.  One “shit” definitely wouldn’t have covered it. My son was learning the power in those words as an excellent alternative to misplaced male aggression, I reasoned. The s-word wasn’t lost on me and it happened behind closed doors. Besides, he saved me the trouble of saying it myself.  Happy?  No. Amused?  Well…at the time, maybe a little.
Shortly after the vanilla incident, we moved from Nevada to the Midwest.  We no longer had Las Vegas signature cinder block walls around our home which had provided the kind of privacy any mob family or witness relocation family desires. There were no fences at all and springtime meant row after row of homes with wide open windows.  Our toddler would wake up crying every day (read: screaming as if he woke to having his toenails removed) and my husband would run through the house shutting all of our windows. Heaven forbid someone hear the noise and think we were terrible parents or torturing an animal or perhaps holding Yoko Ono hostage in our basement.   The first sunny weekend when all our new neighbors were out planting their marigolds and edging their lawns, we opened the garage door and waited for it to slowly rise like the curtain in a Cecil B. DeMille feature presentation for the big reveal of our little family.  Before it was even halfway up, our very verbal toddler took a deep breath and went tearing down the driveway yelling “OHHHHHHH GOOOOOOO—DAMMMMAAATTTT!”
I breathed a sigh of relief that we no longer had a valid excuse to keep our windows closed in 80 degree weather.  Our dicks were right there flapping in the wind for everyone to see.  Nothing else to see here, folks.  So when the guy who lived across the street stopped by weeks later to introduce us to his mother who just came back from a mission trip overseas, he couldn’t have been THAT shocked when our already implicated munchkin’s voice emerged from the other room interjecting, “JEEEE-sus CHRIST!” every time she asked if we were familiar with the Gospel.
As much as I wanted to hold true to my convictions about reducing the power of blue words by not making them off limits, my once little blob of id was sopping up vocabulary and wringing it out in context more and more in public.  PRO TIP: Turns out most adults don’t have a similar philosophy regarding the fluidity of language in children.  Of note…by the time he was four, he hated hearing us swear and would call us out on it any chance he got.
People usually have one of two responses when they hear a toddler utter words reserved for the adult world.  Some find it hilariously funny because the punch of “fuck” is deflated by adding the helium timbre of a tiny voice. Some enjoy watching an adult get bent out of shape over their angel saying things like “twatwaffle”, which isn’t even a real word anyway.  Others are highly offended because it means the parents are not checking themselves in front of their children or they believe the child is being disrespectful….or SOMETHING.  I don’t know exactly what that something is or when the committee meets to decide the official list of bad words for kids.

Words are weird. Toddlers know that in a way that adults have long forgotten.  By testing the linguistic waters it helps them understand that there are certain words that separate them from adults.  They learn then that some strings of letters are bafflingly powerful.  I wanted my kids to understand that context is truly what makes those words meaningful ( “I just pushed a baby out of my pussy, now get me something to drink” versus “When you are a star you can do anything…grab them by the pussy…anything”). When it became apparent that my youngest child might never have functional verbal communication, the power behind a random set of phonics changed for me again.  Every. Single. Word. Counts.  Hours upon hours were spent breaking down words in a backward chained series of repeated sounds.  We methodically touched our faces with certain letter sounds and paired words with sign language whenever we spoke to build a bridge between what he heard and what he saw.  I had stacks of flashcards in every corner of the house and words and sounds of the week that we worked into playtime with him. Have you ever said a word over and over to yourself until it sounded completely foreign?  That is what every day felt like for many years.
My tween still cannot communicate verbally much better than a young toddler, yet he views the world in words and pictures in the way any 5th grade boy might. As a mother, I rounded the corner quickly on the learning curve with my oldest kid, but there is only open road when you have a child who cannot clearly make their needs known.  My instincts tell me to encourage any words he has no matter what. He knows all the cool logos on clothes and insists on them.  He notices the pretty girls and hams it up around them.  And he most certainly knows when his older brother is being difficult.  Who am I to stop him if he calls him an asshole?  He is probably right.

About the author: Jaycee Kemp is a social worker raising two perfect kids on the spectrum in an imperfect world.  When she is not busy being educated about life by them, she likes to take what she has learned and tell people all about it through crazy-ass things like TEDx talks, book-writing and blogging.  Jaycee been featured on The Mighty, Break The Parenting Mold, Birdhouse for Autism and her own corner of the internet at www.runningthroughwater.com.  You can also find her way more than you should on social media on Facebook and on Twitter. 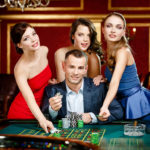 No, Tell Me Again How Exhausting Your Business Trip Was 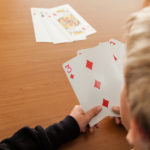 My Kid is Gambling at His Christian School