It’s a nifty trick. “Look,” my daughter says. She is in the passenger seat with her study guide for the science test. She covers one eye and moves the paper slowly toward her face. I look between her and the road. “At a certain point,” she says, pointing to the dot on the page, “you can’t see it. It just disappears. That’s your blind spot.” She brings the paper closer, “Then, it suddenly reappears.” Blind spot? She will be driving in less than four months. I can’t think about her and blind spots.

“Shouldn’t we have adapted to this blind spot in the course of evolution?” I ask. “For our own safety?” She shrugs. “It’s just where the optic nerve comes into the retina, so there’s no room for cones and rods.”

Out of the corner of my eye I can see the study sheet on her lap, the two eyes of the test dots. I can see both of them from the wheel even as I watch the road, but I know there is a vast middle ground where I would prove blind. Long, dangerous fractions of seconds of seeing nothing. Accidents happen in these milliseconds.

After years of watching my son race, I know hundredths of seconds are anything but negligible. It doesn’t matter how pretty a runner you are, if you have the gorgeous stride of Bernard Lagat or you barrel through the finish line. The clock is all that matters.

Hayward Field in Eugene, Oregon, is the premier track facility in the nation, perhaps the world. The Olympic track and field trials were held here. Over the weekend, our family drove nearly six hours round trip to Hayward to watch my son run less than two minutes at an elite high school meet.

His coach stands at the track’s turn and calls out splits. It is always just a numbers game. If my son is going to run the 800 meters in 1:55, he must complete each of the two laps in less than a minute. He is also trying to set a new school record, which means he must run each lap a little faster to finish in 1:55. His coaches and teammates check the record book one more time before the gun goes off.

The race is fast. I try not to blink. I have set my camera to the fastest aperture. The camera fires off a dozen shots, which later I will scroll through to see how Luke, stride by stride, passes one, two, three runners in the last 150 meters.Luke runs the race of his season and sets a new personal best. It is just shy of the school record. He crouches in the infield and heaves.

At the track’s turn, hovering above the fence, something catches my eye. A dandelion puff. A vial of sunlight. We had packed rain gear but it was sunny. Sun in Eugene. That is something, I thought. And then, I see him. His head turned peculiarly to this white light, his lips working at an invisible straw, sucking at nothing, craning for the liquid in the syringe which his father holds above his wheelchair, letting gravity work the fluid down into the boy’s feeding tube and into his belly. The boy turns an ear to the syringe. Could he hear the fluid slipping through the tube?

The runners gasping over the finish line? Here is this boy, tiny and broken in his wheelchair and there is my boy with his seconds. And for a fraction of a second I can see that vast middle ground in between. The space between which is simply gratitude that my son can stand, that everything in him works. My son here to love and be loved. Period. End of sentence. Victory over the other things that could have been. And yet, I will forget this other boy. Again and again, I will lose this sharp focus even as I know that I should press my head to the floor and bow beneath all that we have unwittingly skirted every second of every day, emerging safe.

When my daughter gets out of the car at school, she is smiling. She is my daredevil. The gymnast who flies off the high bar and hand springs down three inches of beam.

She packs her science notes away. “It’s a good trick,” she says again. The two dots. The eyes. The unseeing. There is mystery in these moments of blindness, a mystery, which this morning delights her. Full of things that can happen because her eyes are open.

Claudia Hinz lives in Central Oregon. Her novel, GODS OF THE ICE, is out on submission. Her work has appeared in The Boston Globe, International Herald Tribune, Flash Fiction Magazine, 1859 Oregon’s Magazine, and True North Parenting. 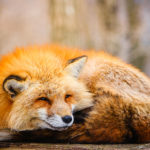 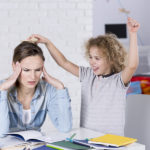 I’d Get an F in Homeschooling