Recently, I helped a friend craft her online dating profile. She took it seriously, carefully constructing the perfect responses to all the standard getting-to-know-you inquiries, while I peered over her shoulder, offering flippant remarks.

My friend eventually got fed up, snapping at me, “This is HARD, okay?”

“What’s so hard about filling out a personality survey?”

“You don’t understand. You don’t have to go through this; you’re already married.”

Selfish relief flooded over me, as I realized I didn’t have to try to find a mate; he was home watching the Yankee game, waiting for me. But as I watched my friend struggle to find a photo of herself that conveyed “adventurous, but not sexually,” I knew that there was no way I would ever be able to enter this world of singletons. If I could barely craft a twitter handle, I certainly couldn’t throw together an online dating profile.

Basically, if anything ever happened to my husband, I would die alone.

To be fair, I’ve never really had game. My idea of flirting involved staring at the back of a guy’s head until he turned around, at which point I would look away quickly and ignore him the rest of the night. Not much of a head-turner, I took my average looks and cultivated an arsenal of tricks to try to overcome it. I perfected a pout that rivaled Zoolander’s Blue Steel. I learned to toss my hair when I danced, to jut my hip out at an angle that made my legs appear longer. I carried myself with an unearned confidence, and kept the witty rejoinders coming fast and furious.

It sometimes worked. I could walk into a party and leave with the phone number of the fourth-hottest guy in the room. For a girl with a modest face and more jazzy lines than an F. Scott Fitzgerald character, I did all right.

Once married, I allowed the comforts of being in a relationship to transform me. My weight crept up incrementally; a six became an eight, then a ten. Some days I would skip putting on any form of make-up altogether. My roots grew out past my ears and dissolved into gray. Instead of changing into pajama pants at bedtime, sometimes I would change the second I got home. Sometimes I left the house in pajama pants, figuring, “Who cares what I look like?”

Certainly not the male population outside my home, that’s for sure. My bag of tricks had become passe decades ago. My petulant pout had become caricatured by duckfaced selfies. It was too hard to toss my hair while pulled in a ponytail, and my jutted hip was padded with two pregnancies and a love of processed food. On the rare occasion that I went out without my husband, men did not notice me, unless I accidentally sat on their jacket or knocked their beer over.

Normally I didn’t care. I was married. In love.

But some of my friends were getting divorced. One was widowed. This was terrifying. Just in case I had to know: did I have any last traces of desirability?

While getting ready for a friend’s birthday party, I attempted to pull myself together. I removed my ponytail and tried to brush out the lumps from the rubber band. I painted on the trappings of a party face and wore an outfit that did not contain a cardigan or pajama pants. I was ready to pull out my old tricks and see what still worked.

I arrived at the bar, the type of trendy place that served minuscule portions of food that friends always wanted to “split four ways.” I tossed my hair and jutted my hip in the general direction of the bar. Guys flocked to my friends, but no one offered to buy me a drink. As the night wore on, I kept looking for a place to sit, snuck glances at my watch, and wished they’d turn down the music so I could have a conversation. If only someone would talk to me.

I snuck off to the bathroom and spent ten minutes crouched in a stall watching a video on my phone of someone making creme brulee, and then another ten minutes trying to scrub a dark wine stain off my lower lip. It was time to call it a night.

While polishing off my last drink and saying my goodbyes, I noticed him. He was probably the fourth-hottest guy in the room, and he was walking over to where my friend and I stood. As he approached, he turned toward me. I hoisted my jean waistband above my gut and tried to pout.

He held my gaze for a half a beat longer than necessary.

Which I had just used by mistake.

I drank my drink fast, feeling every second of my age, every pound of my weight.

“Who was that?” My friend appeared behind me.

Once home, I let myself in, the glow of the television telling me my husband had stayed up waiting for me. I joined him on the couch and curled up under his arm.

He just smiled, pulled me close, and we watched the end of the Yankee game together. 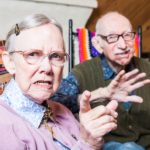 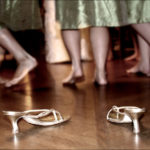 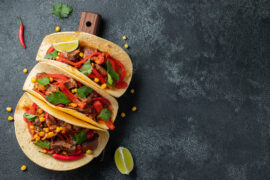 Tacos for Thanksgiving: The Evolution of a Holiday 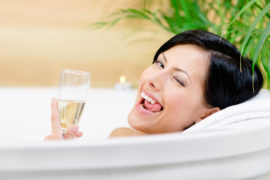 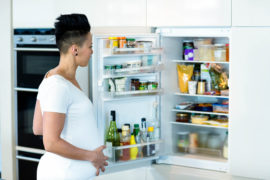 My Fridge Judges My Storage Choices