Forgive me, fellow train passengers, for I have sinned. It’s been ten months since my last pregnancy, and I’m still finding it hard to…detach. Perhaps if my work commute were less traumatic, I wouldn’t have been led down this path of deceit.

A typical day on the train finds me crushed between two high school kids holding cellos and several tourists wielding suitcases large enough to conceal a body.  Gripping the pole in front of me, I unconsciously resumed a pose from my not-so-distant past: I shifted my weight forward, leaned back slightly, and put my hand on my belly.

Oh dear.  Without realizing it, I had given off the “pregnant” vibe.  Ten months ago, it was an act to protect my unborn child from the jostling horrors of the city subway.  Now, it was a reflex, a habit that, post-baby, was still part of my train routine.

“Thanks, but I’m okay.” I went back to reading my book, feeling my first twinge of shame. I really needed to hit the gym.

A moment later, I felt a soft tugging on my arm.

“Miss, you should sit.” She stood and moved away from the seat.

At this point, I should have confessed, but I didn’t want to embarrass her.  Or myself, for that matter.  My midsection was still buoyant with baby weight, not helped by the 12-inch sub and Doritos I’d scarfed down for lunch earlier that day. But then, out of the corner of my eye, I saw other passengers creeping toward the vacated seat.  I conjured up the injustice of all the times I had to stand, back when I was was nine months pregnant, bloated and staggering and desperate for pity.

Without even thinking, I began massaging the sub in my belly.  I even considered naming it (“Sandwich,” maybe “Sandy” for short), and invented a due date, just in case anyone asked.  Although no one questioned me, I was fully prepared to perpetuate the lie.

The sweet woman now standing in front of me was undoubtedly a mother too.  She’d stood on countless trains while the man-spreaders took up three seats to give their balls “breathing room.”  While seated teenagers played Candy Crush on their phones and glared at her swollen legs of entitlement.  While people raised their newspapers to block the sight of her belly, pretended to sleep, became fascinated by something on the train floor.  Anything but acknowledge the unwieldy pregnant woman swinging around the subway pole like a hippo moonlighting as an exotic dancer.  She remembered the desperation and physical weariness that only an expectant mother can feel, and wanted to pay it forward.

And now a jerk like me comes and takes her seat.

The whole ride, my stomach cramped (Was it Braxton Hicks? Probably just guilt).  I tried to justify it. That woman was totally fine; it’s not like I took a seat from an elderly or disabled person, or even a real pregnant woman.  I’d already paid my dues for nine excruciating months.  I was tired.  If I hadn’t taken the seat, that stupid teenage cello player would’ve taken it. I was owed that seat, right?

The next day I boarded the train, determined to be less of a horrible human being, but I was quickly sucked back into the hellish vortex of the rush-hour commute.  Once again, I stood with my head in some lady’s armpit, and my feet crushed by a duffel bag most likely toting around bricks, contorting myself around all the elbows and dropped shoulders.

Once again, I put my hand over my belly.

What the hell was I doing? I looked around, but no one seemed to have noticed.  Sighing deeply, I thrust my stomach forward, the burrito I ate for lunch jutting out over my waistband. A few seated riders glanced at my midsection, unsure, but stayed put. I actually started to get pissed at the oblivious man sitting right in front of me, allowing me to stand in my delicate condition, ignorant, selfish, oblivious…

Wait, I told myself. You’re not really pregnant. Not anymore. You’re just an exhausted, overworked mom with poor eating habits, no more entitled to a seat than anyone else. I clutched the pole, sucked in my gut, and tried to imagine all the reasons why the seated passengers needed those seats.

In a miraculous quirk of fate, the man in front of me stood up and got off at the next stop.  A seat! The Golden Ticket of the Mass Transit Authority! I scoped the train car to make sure there were no real pregnant women lurking about.  No elderly or disabled; no one with a cane, or a small unsteady child. All clear. Of course, in the time it took to survey the train, another woman slid around me and sat down.

I reassured myself, she’s probably a mother. 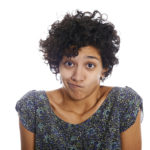 What I Thought I Knew About Parenting Before I had Kids 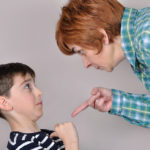 When Kids Pay for Their Parents’ Mistakes