In a world increasingly populated by personal opinion, it’s easy to forget the real meaning of blunt, that it’s actually the opposite of cutting and sharp. By definition, it means “uncompromisingly forthright.” Sometimes being blunt doesn’t mean swearing or drinking or saying your kids are annoying the shit out of you. Sometimes it means saying exactly what you feel. Sometimes it means being vulnerable. Especially for us unsentimental types, it’s way scarier being forthright about our warm, fuzzy feelings than it is to muse on less, ahem, acceptable topics. (Exhibit A: the Being Naughty tab of this site.)

If we’re truly committed to uncompromising forthrightness about ourselves and our perspectives of the world, we must show all of it. In my case, it’s a letter I wrote to my husband shortly after the birth of our second child. We were on holiday in rural France, getting dirty and exploring the grounds of a magnificently aged chateau and basking in the luminescent sunlight. All of our everyday stressors suddenly were at the bottom of a deep stream, far away. I found myself glowing with love for the man I often take for granted. As anyone with a marriage license and any number of children knows, these moments become sparse when the babies begin to arrive. Especially in those first murky months of sleeplessness and chaos, and especially after kid number two rolls around. Quality alone time? Romance? They are things as fantastical as a unicorn laying golden eggs. After a near-magical night out at a fancy restaurant and a wild drive on country roads, I was compelled to capture the way I’d felt that night, that week, to bottle it up tightly, to record it. Little did I know how precious these words would be to me later on, how often I would revisit them, and how effective they’d be in extracting me from some of my darkest hours.

Someday we will look back at this time with longing, this breath-short period in which we are young and beautiful, our children younger and even more beautiful, and the future something intangible, bright. A few days ago I awoke on the arched back of a quiet morning and was filled with such gratitude I could hardly draw a breath. Normalcy for us is something exquisite.

Our chateau is the kind of place where only some of the locks to the outside function, where the loudest noise in the walled garden is bees trafficking pollen from the pear tree to the wall of honeysuckle, only occasionally rivaled by birdsong or the muffled cough of a tractor. I pick wild strawberries in the garden outside our bedroom while our children take their midday sleep, the unfiltered sun warming the spot between my shoulders. The berries, no bigger than marbles, lie hidden under the plants’ squat canopy, candy-sweet and lightly red. I leave no leaf unturned in the pursuit of sweetness. May we always remember to do the same.

One night, we leave the chateau, depart with a Michelin-starred restaurant circled on a map. On the way down the long gravel driveway rutted from heavy rain, we pass two figures. Each cradles a child against a wooden fence to pat a dark, soft-eyed Thoroughbred and an endearingly asymmetrical donkey, ears askew. We wave, blow kisses through the car window. The children are ours, in the arms of their grandparents.

At dinner we choose a wine called Le Enfant Terrible but are talked out of it by our server’s description; it tastes “strongly of barn animals.” I get tipsy enough to whisper sparkly-eyed to you, “It’s like an orgy with the food gods” after biting into a tiny slab of barely seared tuna and garlic ice cream. I remember how funny you are, find my laugh again. It attracts eyes in the hushed room like iron dust to a magnet, but I’m sober enough to otherwise keep my voice French conversation-quiet and ruminate on the exquisiteness of the food being presented two servers at a time. We made partial sense of the Course descriptions and figured out what remained with our mouths. A man two tables over is rangier than but uncannily a doppelgänger of Vladimir Putin. I can’t stop giggling.

I am your wine-dizzy passenger in a fast car on the way home, insistent on my window being open. I say I like it wild, let my long red hair tangle. You sing along fearlessly to a song on the radio. I have one foot on the dashboard. I say I never want to leave this place.

We’re finer versions of the people who met eleven and a half years earlier, better dressed and less selfish. We put our lips to two small foreheads when we get back. I want to always remember us this way. Later, I’ll wish we’d photographed ourselves that night, almost perfectly groomed, a bit giddy in the eyes.

Happy Valentine’s Day, people. If you’re with the one you love, never forget it. Never ever.

letter to my husbandloveValentine
0
Author Jess 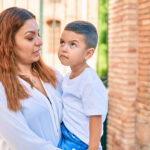 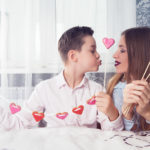 Six Reasons I Ask My Son To Be My Valentine