I don’t know exactly when this change began but if I added up all the starts and stops, it might be well more than a decade now. Sometimes I wake with night sweats or restless legs. Other times I roll over with my sore boobs, hoping for a few hours of sleep so like Bill Murray in Groundhog Day, I can begin another day in a few hours or less.

I’ve tried everything – acupuncture, long hot baths before bed, the massage chair, reading books late into the night, twisting my body into yet another yoga pose, even sleepy herbal teas concocted by some small hippie outfit in New Mexico. I’ve even subjected myself to suction cups, yielding 16 perfectly round hickies the size of tennis balls arrayed tic-tac-toe-like across my bare back (think Michael Phelps and his Olympic spots). All to no avail.

Greeting my 85-year-old wise mother the next day after a bout of insomnia, she peers into my bleary eyes and says, “It’s the glories of middle age, dearie.”

Middle age? Middle of what? If this is the middle, what does the end look like? And weren’t THE Middle Ages when women were burned at the stake, people were bludgeoned in town squares to the cackling of crowds and humans filled coliseums to watch people mutilate each other to the roar of mobs? I’m not sure middle age is a reassuring term on any level.

And no thanks to Webster’s, middle age is defined as starting at about 45 and lasting some 20 years until you hit 64, at which point, I guess, you can officially identify yourself as an old geezer, and be left alone to rot and decay. So I’m in what could be called the “earlier middle ages” although there’s no telling where I land in the perimenopausal staging which seems to have stretched from my 30s into my 40s. Seriously.

Then there’s the glorious acronym of GERD, otherwise known as acid reflux, or more clearly defined as what feels like a glob of peanut butter stuck in the throat, or better yet a fur ball.

Maybe I could ignore it better if I was getting sleep but these days (or nights), I’m mostly awake. Wide awake. But not the kind of awake that kindles productivity, as if you’ve had a few shots of espresso and you’re on a streak to success. It’s a maddening kind of awake, a zombie-like stupor of being conscious but not awake enough to be able to do much of anything except freak out as the night drags on that you aren’t getting any sleep and probably never will for the rest of your life.

Menopause, perimenopause, middle age, whatever you want to call it, it’s not something easily discussed, so better just to sweep it under the obligatory rug. Me, for one, I just want to pretend this isn’t really happening.

Can’t we just forego this entire transformation and get on with it? Can’t we skip the sleepless nights, sore boobs and the erratic menstrual periods which have become more like total Armageddon, an all-out war between mind and body?

As it is, one day I overhear my teenager say to my husband: “I think my mom is going through the change.”

My unspoken response, “No shit, Sherlock.”

My second thought, “How enlightening. It takes one to know one.”

Together, the two of us are shedding one stage for another. Whether you are on the front end (pubes and boobs) or the back end (The Pause), some days it feels a bit like larva turning to goo inside its cocoon before becoming, hopefully, a butterfly. Or maybe the most I can hope for is to emerge as some insect that has all its crawlers intact and still can manage to suck and siphon the last few drops of nectar out of this fading flower.

That, or maybe I’ll skip the foreboding, embrace the process and try my damnedest to enjoy the middle of nowhere. 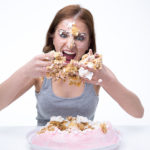 A Letter To Parents Who ‘Forget’ To RSVP To Birthday Parties 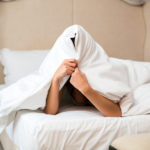