Twenty-four hours. That is precisely the amount of time that most mums are given, during sick leave. Now, let me clarify, by sick leave, I don’t mean paid hours while we’re recovering from the flu, I mean, a set amount of time (24 hours), before sympathy, tolerance and household maintenance takes a back hit.

I myself, have just resurfaced from a full day of bed-ridden incapacitation. For those who know me, are aware of my struggles living with Lupus, so with a compromised immune system, my chances of picking up second hand infections are quite high. This is exactly where I had found myself yesterday.

Coupled with extreme fatigue, muscle pain and bronchitis, I dragged myself and little man, also suffering from a nasty cough, down to the medical centre. A 9:00am appointment, turned into a 45-minute wait – don’t you just love medical centre’s! – and I was finally seen by my GP, who prescribed me a course of antibiotics and a sympathetic look. Being a full-time, stay at home mum of two boys, there was a very slim chance I was going to be able to “put my feet up” and rest. I reached the point though where I had no choice.

From nausea to vertigo, I was unable to function at a normal capacity so spent most of the day in my bed, boys having free roam of the house. Usually, I helicopter parent, because if you have ever met my children, you would be well-aware of their mischievous ways. Yesterday though, I honestly couldn’t have cared less. Of course, I did the adult thing and hid away any sharp objects, flammable items and pretty much anything that could be used as a weapon, and I tucked myself underneath my blanket. The medication knocked me to a six so between passing in and out of sleep and the heaviness I felt in my head, I randomly called out to the boys to make sure they were still alive. They were.

Surprisingly, there were no issues. Strangely enough, they seemed to get along better than most days and there was no need for drill sergeant mum to intervene. I did however, wake up at one point to find post it notes scattered from the kitchen to the living room and somehow my shoes had taken shape to resemble the great wall of China across the floor. Beggars can’t be choosers, right?

Lunch was a combination of chips and sultanas from the pantry thrown together with a few cherry tomatoes for nutrition and thank God for Netflix. I don’t care how lazy that sounds, because when you’re down and out, I’m sure the inventors of mindless tv scrolling had mums in mind when they created it.

As I piled up the tissues on my bedside table, there were a few kisses and cuddles shared and I could tell that the boys were genuinely concerned for my well-being. Once my husband came home, he took over the dynamic duo and let me catch up on some much-needed shut eye. All in all, it wasn’t too bad of a day, despite the fact I felt like I was on deaths door. Everyone survived.

The next morning, this morning to be more specific, was a much different story. “Mum! I’m hungry!” Echoes of slightly disgruntled children made their way into my bedroom at an ungodly hour. I begrudgingly dragged my feet to the kitchen to whip up a cooked breakfast, because it was Saturday and heaven forbid, they eat cereal on the weekend! I felt slightly better than the previous day and it wasn’t too much effort to keep them quiet just that little bit longer. So, dosed up on paracetemol, I took them out for a coffee and a meander through the shops to pick up last minute dinner items and birthday gifts. Here is where the 24-hour pass fell through.

As Mums, we think of everything right? Not to say that dads don’t, but in my household anyway, I am the walking-talking calendar of upcoming events and the essential lists for household needs. It was a nightmare. After a while, the medication lost its effect, and I could feel the masked symptoms of my illness slowly creeping back. My ears were blocked, my nose was running like a tap, I was breaking out into a sweat and yet still I had to soldier on. Because once those 24 hours passes, life must resume as normal. There is no choice. Well, there is but, eating tinned tuna for dinner and running out of clean underwear isn’t an option. I had to keep moving. Get things done.

From one day alone, my sink was emitting a questionable odor, the boys had somehow forgotten how to aim into the toilet bowl, my dog had taken free reign of the couch with her chewed up bone scraps and hair balls and dust bunnies had consumed the floor. I suppose, the men in my life could only hold down the fort for so long before they discovered cannibalism and free balling, so I took the hit and I’ve revoked my 24-hour pass of sympathy and le-way and immersed myself head first back into the call of duty.

I often wonder, how long they may survive without me around and while it would so very entertaining on my part to watch the madness ensue, I suppose I should save them from themselves and get on with it. Till the next 24-hour pass comes along that is.

Mariel Hanna
Freelance writer and mama of two boys, documenting my parenting journey, living with lupus and exploring my creative side on my personal blog. website: http://www.tinybricksandme.com
Facebook page: https://www.facebook.com/tinybricksandme/ 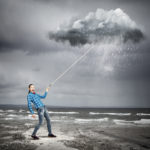 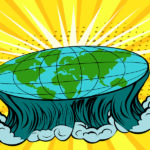 8 Facts Proving The Earth is Flat

Feeling Nostalgic for My Chain-link Fence