Like all adult children whose hoarding parents suddenly decide to clean house, I received a box of my childhood artifacts to take home. I gave the box a perfunctory glance; after all, I was content letting this stuff fester in my parents’ attic for more than two decades, so it could probably get trashed without much fanfare. I was mostly right: grammar school notebooks, old spelling tests, artwork that involved handprints turned into googly-eyed turkeys.

And then, stuffed at the bottom, was my elementary school yearbook.

The pages stuck together and had faded slightly, but everything else was the same: front cover picture of the school itself, back cover a zoom-in of an American flag. Inside, I was on practically every page. There I was as the star of the soccer team, the captain of the school dance team, the class president. Pictures of me with my arm slung around other girls, smiling and laughing, cute boys watching from the sidelines. Pages of scrawled messages from my classmates, reliving fun memories, celebrating our friendships, encouraging me to “K.I.T.-keep in touch.” Finally, I arrived at my 6th-grade portrait, with my flawless complexion, stick-straight hair, and radiant smile. No wonder I was the most popular girl in school.

Remembering my elementary school glory days should have left me feeling refreshed and nostalgic, but instead it caused bile to rise in my throat.

Because that yearbook was 100% fictional.

Many kids have imaginary friends or vivid inner lives; I chose to illustrate mine.  Being an 11-year-old friendless introvert with a great deal of artistic talent, I carefully crafted the yearbook of my dreams. I drew myself as a pretty girl with tons of close friends and a cute boyfriend. I voted myself “Most Popular,” elected myself class president, and drew myself excelling at all the activities I was afraid to try.

I copied the front and back cover of my actual yearbook to make my fake one seem more authentic. The most pathetic part was when I signed my “yearbook” using different colored pens and handwritings to represent my array of fictional friends and document our fictional friendships.

I didn’t exist in my real yearbook- nothing but my shoulder in a candid picture from a field trip, or my blurred silhouette in the background of someone else’s group shot. The signatures in my real yearbook ranged from impersonal “it was nice knowing you’s” to “Roses are red, violets are blue, walls are flat and so are you.” Under my class portrait, my name was misspelled.

Looking at my 6th-grade portrait helped me pinpoint the exact moment when I realized that I was not beautiful, and maybe never would be. Adding to that, my crippling shyness made me come across as aloof and snobbish, although I was neither.  Since I struggled to connect with my classmates, I instead focused on what I could control: conjugating verbs, solving for “x”, calculating the altitude of Polaris. I retreated into my own head. And the gulf between us grew wider.

Then came the bullies who made up nasty songs about me (even I had to admit “Geek of the Week” was pretty catchy) and occasionally acted on their physical threats. I graduated elementary school convinced that my life would be a lonely purgatory that was my own fault; everyone else knew how to act normal and make friends- why couldn’t I?

I was probably the only kid on earth who was excited to go to middle school. I met kinder, more like-minded classmates, and in high school even acquired a best friend, which was a game-changer. By the time I reached college, I treated friend-making like an academic subject, studying the special alchemy needed to make people like me, even boys, and practicing diligently until it started to feel natural.

Even today, I’m overly conscious of how I come across to others. Do I smile too much? Are they avoiding me? Am I bothering people? What is the right thing to say in this situation? With every new person I meet, I live in fear of the social misstep or weird remark that will make our burgeoning friendship come crashing down. For people to realize that I’m the type of person who would create a fake yearbook filled with fake memories because the real ones were too painful to flip through.

I threw the yearbook in the trash and buried it under more trash. Then I took out the trash.

To this day, I have no idea if my parents actually saw my fake yearbook.  Perhaps they came across it while cleaning the attic and assumed it was a school project. Maybe they’d read it decades ago, and after becoming privy to the depths of my social anxiety, feared for me in a way that was utterly out of their control.

I pray that my daughter won’t inherit my awkwardness.  At four years old, she is gregarious and playful, but prone to introspection, often choosing to play by herself.  I want to take her in my arms and warn her: Play with the other kids! Be yourself, but don’t opt out of new experiences, even if they’re outside your comfort zone.

And allow others to share your inner life so that you can cultivate an outer one that nourishes you just as much, if not more. 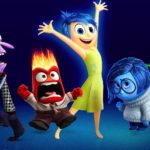 The Five Stages Of Stomach Bug Acceptance: As Described Through The Characters Of Inside Out 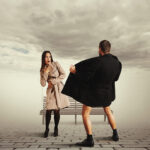 Please Don’t Show Me Your Junk