Athleticism, fame, and fortune aside – I want my little boys to be like Bruce Jenner. The Bruce Jenner of today, whose left eyelid droops after too much plastic surgery, who is trapped in purgatory between man and woman.
I want my sons to emulate the person who lived a lie most of his life, and hurt a whole lot of people in the process.
Here’s why.
1. He’s honest. Okay, I get it. It took 3 failed marriage and an army of uber-confused children – but you gotta hand it to him. Bruce’s honesty is not of the “I will not tell a lie” variety. It is more of the raw, “I’m going to bear my ass naked soul to the world regardless of the consequences” nature. He’s come very clean about his dirty little secrets. Being caught red-handed in woman’s clothing by his daughters on their security camera…his desire to enjoy wine, cheese, and girl talk with friends as the female version of himself…the little black dress he plans on rocking at a public appearance in the near future. He understands why his relationships have failed, how his children might be affected by his decisions, and that the world can be a cruel place. It doesn’t shake his desire to be honest with himself, and with that potentially cruel world. I want that for my sons.
2. He’s self-accepting. Is it self-accepting to take hormones for years on end, and undergo surgery after cosmetic surgery to change yourself? Doesn’t seem to be, no. But Bruce finally feels like he knows who he is. He’s ready to own it at age 65. Maybe that includes a full-body transformation. Maybe not. For me, that “like me or fuck off” frame of mind set in at age 30. For my sons, I hope it’ll happen sooner than later.
3. He focuses on the good. Bruce’s kids have pledged their support for their dad on his roller coaster ride toward feminine living. His outspoken ex couldn’t even summon up a stereotypical “I wish him well” message. I have no idea how I’d feel if my husband told me he had the soul of a woman and a longing to dress himself from my closet after 23 years, but I can’t get behind Kris’ lack of tact here. What I can get behind – and what I want for my own kids – is for them to focus on the people who lift them up. The ones who accept their quirks, and even celebrate them. Bruce’s kids do that for him. I want my boys to figure out who does it for them, and to hold those people close.
4. He has a zest for life. Dude’s 65. He considered suicide based on the negative attention, but he says he wants to know how this story ends. I hope my boys never put themselves on auto-pilot, and realize there’s always a lot of living left to do. If they want to do it in a pair of red stilettos, more power to them.
5. He doesn’t have all the answers. And he doesn’t pretend to. Is he a lesbian, seeing as he is attracted to women and also considers himself a woman? He doesn’t know, and that’s just peachy with him. Tough questions arise. I hope my kids will think them through, and don’t blurt out answers that will make others happy or more comfortable. “I don’t know” is perfectly acceptable. I hope they get that.
And a bonus:
He has clean fingernails. Not as virtuous as the others, but still important. Bruce’s nail game is on point. They’re well groomed and not chewed. My grandmother used to make my brother and I wash our hands and clean underneath our fingernails with a toothpick before school in the morning. If it was important to her, it’s important to me. I want my boys to be well cared for, right down to clean hands that are ready to go and do whatever they find fulfilling.
Author bio: Kate Brierley is a freelance writer and contributor for the Mom of 11 Kids’ community blog. She’s a Rhode Island native along with her husband, and their son, Henry, with another little boy on the way.
0
Author Wannabee BLUNT

What Marriage Vows Should Really Be 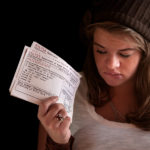 The Unspoken First World Hypocrisy of the SNAP Challenge