When I was growing up, tickling was a kind of torture used by my older brother, and neither crying nor peeing could save you. Your only option, if you wanted release, was to concede defeat with those blasted words: “Mumbo Jumbo, King of the Congo, you are my God forever.” (I have forgiven my brother, of course, but someday soon when his crickety, hunched body is supported by no more than a cane, I will push him down a flight of stairs and softly and delightedly whisper: “Who’s Mumbo Jumbo now, bitch?”)

I know other families see tickling as harmless play and even a means to attach with each other. Understandably, though, it has always been taboo in our house, and long ago I replaced it with a kinder, gentler ritual; our living room became the venue for suburban Macho Libre matches, where *Thunder Mama* could bond with her peewee luchadores all the livelong day.

I think, though, I might have been a smidge short-sighted when I ignored the fact that time passes, and sweet three-year-olds grow into 15-year-old thugs.

Unfortunately, these boys no longer respect the “slo-mo rule.” We always tussled at ⅛ speed, since I was a softie who didn’t think pile-driving a child in real time was 100% fair. At present, my sons could choose to reciprocate my patient restraint; instead, they treat me like I’m a fleeing shoplifter with a silk scarf stuffed in my pants. And they’re only getting faster and slamming harder. Maybe this is why my quick tapouts are so hilarious to this set of brothers.

What’s worse is that they have expanded their repertoire of holds and takedowns; I have not. Thank you for that, YouTube. I taught them the fine art of the Scissorhold and Djiboutian Headlock—but now two thankless aggressors think it’s okay to supplement my classic moves with the Hells gate, the Batista bomb, and the Calgary crab. The progenitor of our nuclear family Wrestlemania, I never once suspected I would have my face ground into the frisée or linoleum by my offspring. It seems like they are violating a should-have-been-written-down code if this matriarch routinely suffers rug burns on her lips. I feel insulted. And still, they giggle and high-five each other.

The fact is, Cross Family WWE is not pure fun anymore. For me. When they were pipsqueaks I could easily crush them. Now, both over 150 lbs, they have a clear advantage over a woman with one jellied muscle who can’t speed-walk fast enough to barricade herself in her bathroom. This poor mom has bouts of vertigo, a snapped ACL, and phantom swelling in both feet and ankles, and these maladies combine to make me a less-than-worthy opponent. And somehow this makes the whole thing funnier to two twisted Mengeles who don’t know their own strength.

Yet… there’s something wonderful about hearing two post-pubescent boys laughing together. Even at their mother’s expense. I am the clay pigeon for their skeet match; the impaled marshmallow at their bonfire; the avocado in their guacamole. Which means I still get a central role in their lives. And I really like it.

Those boneheads have disrespectfully demoted Thunder Mama” to “Grandma Lightning,” but I’m secretly okay with that, too. So I willingly sacrifice my limbs and organs and skull to their whims, knowing that this middle-aged woman will one day become more fragile and breakable—and they’ll sadly have to stop Brainbuster-ing me (or the neighbors will call the cops).

In the end, I have triumphed. Plus, I’ve taught them this: there are many ways a family can become close-knit—and infernal tickling does not have to be one of them. 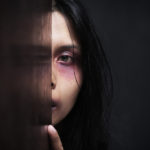 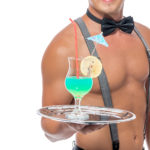 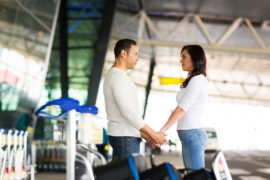 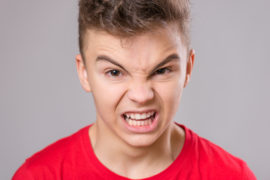