I thought knitting was about making mittens that don’t keep your hands warm and drinking tea. I was right about the tea.

Full disclosure, I tried knitting once. Someone started it for me and handed it over, but I attempted to knit my husband a sweater when he was still just my boyfriend. It was to be a surprise for Christmas. Surprise because I learned to knit, and surprise because I knit him a sweater that he would feel compelled to wear and appear awkward in but would be proving his love by going out in public in it. Luckily, he was saved the humiliation by his own words.

That December, I mentioned, “You will never guess what I’m getting you for Christmas.” Now, a normal person who doesn’t want to ruin Christmas even if they see the elephant with a giant bow and gift tag they are getting for Christmas right in the room would say, “A giraffe?” But my soon-to-be-betrothed did not know this rule and guessed (don’t ask me how) I was knitting him a sweater. I didn’t knit a stitch more. I even sold all my knitting supplies and the partly done sweater in a yard sale years later. I relayed this story to our children recently, and they couldn’t believe that their father had guessed anything at all. “You are so wrong, Dad,” our daughter was muttering as my husband was trying to–still!–defend his stance on the issue. One day he’ll learn.

That was twenty-five years ago, and I am still angry about it. I don’t think I would knit my husband a sweater, even if he begs me, and he is already asking for a hat. At least he is starting small. I won’t rule it out entirely because I could get Alzheimer’s and the world could begin to spin backwards causing a space/time continuum, bringing me back to a time before I had a grudge.

But the goal of learning to knit, I mean start to finish a project, was to do just that. Finish a project. I had no idea how much I would love it! I don’t remember enjoying it years ago (but that might be the grudge talking), so maybe the gift of a Christmas sweater was the gift he got me. He saved me from having to complete it when I was not going to make the Christmas deadline without pulling all-nighters. Bonus, Mister also freed me from having to stifle a laugh with him in that ridiculous sweater before realising I never wanted him to wear it again in public.

What I learned about knitting this time has nothing to do with knit and purl. It has to do with making mistakes. I made plenty. I’d change the way I wrapped the wool around the needle on a whim. I think I was just distracted, but then I would look back on my work and wonder why there was a hole in the middle? I also started, as instructed, counting the number of stitches in a row. I kept getting more and more stitches in the row. If it were only one, maybe I’d live with it, but it was more like four, and I was one-fifth of the way through the project. There were three courses of action I could take. One: I could proceed and live with the mistakes and call it a learning process. Two: I could scrap the whole thing in a yard sale and go back to grudge-holding which had served me so well. Or, three: I could rip it out, decipher my mistakes and fix it, thereby learning how to repair my errors.

This time I chose the challenging solution because that has been my M-O for the year. I ripped out rows and rows of stitches to get to a row that finally had the right number of stitches in it. I gingerly loaded the work back on the needles, and I started again. I can’t even tell you how good I felt about myself for having made that decision. I refrained from beating myself up for having made those mistakes in the first place and was proud of myself for continuing with the project to see it to completion. I cannot claim that I didn’t accidentally wrap the wool the wrong way once or twice in this project even after I ripped it apart. I see the mistakes when I look at it and instead of dwelling on them, I am proud of how few there are. I am pleased that I finished that project, and already finished my third. I am grateful that I am continuing to learn. I’m still not at the point where I can carry on a full eye-contact conversation while knitting a sweater, but I can watch tv and not pick up four new stitches by the end. That is progress.

My Turning 50 Like a Boss Tip: Learning from your mistakes is easier when you forgive yourself for making them. 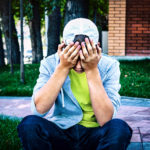 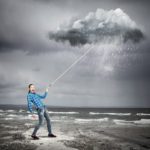