Full disclosure, all the people at the food fight, knew I was going to fling something at them at one point and they would get to throw stuff at me too.

I have always wanted to participate in a food fight like they have in the movies. I just never really tried to start it for fear that someone would get angry because they were wearing their favourite blouse that their grandma gave them just before she died and she needed to wear it to the funeral that afternoon. Could happen.

I, therefore, staged a food fight to eliminate the stress of ruining someone’s day. I provided some ammo and the set up at the venue, everyone wore their washable clothing, and we were ready. We started with a game to get us warmed up to getting dirty, but that didn’t last long. Soon the food was flying, the laughs were raucous, and the game was on. It was everything a movie food fight should be without the working camera.

When we were done, we were a rainbow of red, yellow, white, and green. We had chunks of potato salad, watermelon, tomatoes, relish, and canned goods all in our hair, our underwear, and our clothing was unrecognizable. There wasn’t a squirt to spare at the end, and we were as giddy as we had ever been.

The scene was beautiful.

My friends and I had the opportunity to forget whatever was on our minds for over an hour and just get back to being fun. Parenting was happening during the event with our children in tow, and we were setting an example. Yes. Even though we were flinging perfectly good food that would have helped someone starving in our own city, we were setting a good example. One that fun is allowed, even with your mother and her friends. You can be dirty and beautiful at the same time because your smile and laugh are what makes you stunning, not your clothes or your hair and makeup.

We cleaned up our mess with rakes and rubbish bags we brought with us. Sure, remnants caught in the grass became food for gulls and bugs, but most of it went to the compost and recycling back home. Our son threw our clothes in the laundry, and we warmed in our showers and were still smiling when we collapsed on the couch all clean and dry. It was cathartic. Yes, I just said a food fight was cathartic.

More than one of my friends told me it was their favourite of our adventures so far and I have to agree. I think it was because we were present for every minute of that food fight. You were watching your back and spying your mark and loading your ammo with a shake of the ketchup to the top of the bottle. But, there was no to-do list, there were no obligations forgotten, there was no stress. There was only fun. That is why I recommend every family has a food fight. The mustard came out, the hair came clean, the park was left in good order for the rain that night. What was left was a smile that wouldn’t fade, a shared giggle, and permission to have fun.

My Turning 50 Like a Boss Pro Tip: Setting a good example can also be fun. 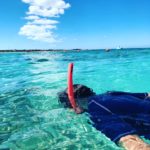 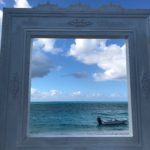 Why We Went From Self Catering to All Inclusive