What do you do when you wake up at 3 a.m., and you have been dreaming about your soon-to-be-ex husband, divorce papers filed? In your dreams of today, he loved and cherished you. And you realize when you were married, you never had those dreams. He was always angry and full of disdain. What do you do? You wake up knowing you missed so much. You see you were dreaming the truth all those years.  You realize that while you loved him, while you were married to him, your dreams of him were not your fears–they were your truths. Your dreams spoke to you and you didn’t listen then.

And you have been married seventeen years; that anniversary is in two days and you are scheduled to mediate your divorce next month.

What do you do?

The anger has subsided, for now, and you remember the things he said, the ways he treated you and you wonder, how, how did I live like that for so many years and not know something was very wrong, not with me, but with him?

How did you not see beneath the lies, the quiet disgust hidden beneath a well-crafted passive aggressive persona? The eruptions of aggression, the rage, the narcissism were well hidden at first, but you saw signs all along, every day, and you molded to it. You stayed. It was familiar, and yet different, so you fooled yourself. And, you felt trapped but you knew what he thought of you, felt about you. At first you shared your whole self and he spit you back in your face. And you knew he was wrong, but you made yourself feel ugly and you closed down.

How did I live like that for so many years and not know something was very wrong, not with me, but with him?

He had no compassion for your childhood pain, your adult pain, or for any emotion. He didn’t share your personal joys, your dreams, and he had no understanding of your needs… and he didn’t want to learn. A narcissist would not. He had masks–well worn–and they confused you and everyone you knew. There was a mask that looked like love, but it was not one he wore well.

You absorbed the bad. You tried to fix things. You loved. You thought he did, but now you don’t know, because how could he have?

And you had children. Some of that was joyful, but for him, it was a fulfillment of self. You were never allowed to have mother-feelings because it was only the children, and they were really versions of him and him only. When you broke down after a two-night hospital stay with your baby, sleeping curled at the end of his bed, pneumonia ravaging his body, he had nothing for you. Nothing even for his son. “Get back to normal,” he said. “He’s fine now. This didn’t happen to you, it happened to my son.”

And as your children grew, they became themselves. They were not him after all, and he raged. And as you grew into yourself, you pulled further away. You needed to live and thrive, and create. You became happy outside of him. You and the children flourished as separate from him. In a world that didn’t fit his, you were flexible, you were growing, and you were parenting special people–not babies. He didn’t know how to do this. His masks began to crumble. You watched it as if from afar. And no one saw, really. Glimpses, but the masks always saved him. They always gave him more time to hide what he was.

And as your children grew, they became themselves. They were not him after all, and he raged.

Until one day they didn’t. One day he cracked, and you saw how he really felt: enraged, disgusted, full of hate. Your family, everything you’d done, everything you worked to preserve and grow, he’d discarded a long time ago. In fact, he may never have really taken you in.

And that is not how you want to live.

Now, what do you do?

You go on. You have to. Do you allow those memories to bubble up, the signs to show themselves as you reflect with calm? You must, because you will not allow this again. You don’t have time. You didn’t have time then, and you want your time back. But it doesn’t work that way.

You have to accept the loss of time that has passed. You have to know the time that is to come is yours and yours alone. He is no longer there to poison you against yourself. You will no longer allow it. You will tolerate him only in the ways you must. You are parents together.

But you see him now. You see his sickness and how deep and rooted it is in his being. He does not see it. He never will. So many have looked with you and they did not see it. They peered, even with a trained eye, and yet were disillusioned by the masks, the depth of the sickness, the creation that was he.

You have to forgive yourself that you married a narcissist. That it took this long to see you were scraping crumbs from the table as scraps for your heart after everyone else’s heart had already been fed. 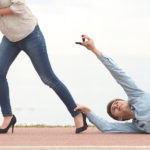 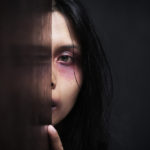