Now it appears I’m stuck with it. You know… that woman’s sexual peak thing.

It began with a rather routine night in the bedroom. For most of the time, we’ve actually dispensed with “sex” itself. Condoms are a pain in the ass. I’m done with the pill (sixteen years was enough of it). He clutches his crotch and moans every time I say it’s time for the snip-snip. And I’m not interested in more kids. So sex is mostly of the oral variety, with occasional toys thrown in for fun and variety.

I’ve always been a “one-and-done” sort of gal. But not that night.

At the usual post-coital moment, he lifts his head and says, “Did you make it?” (leave it to a man to be unsure).

I responded with the evil-eye. As in, “yes, but I’m not done yet. Get back to work, mister.”

What has changed? Nothing, as far as I can tell—except that suddenly and ever since then I’ve stopped fantasizing while we’re doing the deed, everything feels 10x better, and suddenly I’ve got sex hormones enough to rival a 16 year old boy.

So now… the “routine” isn’t cutting it any more. I’ve got my license, damnit, and I want to drive stick.

If you know what I’m sayin’.

He should hurry up and get the snip-snip so I can enjoy it.

While I’m not so old that I don’t remember I was “supposed” to be a perpetually-ready, multi-orgasmic nymphomaniac as a teenage girl in my early dating years (at least, according to the boys I dated), it seems a little weird and perverted to be walking around in a state of semi-permanent arousal. With a kid in tow no less. It does kind of make it awkward to daydream bad pornography about the cute male cashier while you’re waiting to be, ahem, “checked out.”

What’s a gal with a ticking biological clock to do? You go all sex-fiend on your husband, who thinks you’ve lost your mind. Naturally. Because for years, you’ve been the one fending off his random titty gropings. Now you’re the one sneaking up on him in the kitchen and shoving your hands down the front of his pants to drop the subtle hint that you’re “in the mood.”

Nobody ever said nature is without a sense of humour. Now I’m the one being brushed off with excuses about the lateness of the hour, fatigue and headaches.

I make veiled threats in the form of sort-of jokes about trading in for a younger model. Mommy’s got needs, yo.

This may or may not be the reason why battery operated friends have suddenly become normal and acceptable to my husband when for years they posed a threat to his masculinity. And it might also explain why suddenly Jennifer Ashley has suddenly become a “comfort read.”

I don’t know whether I’m getting around to that fabled female “sexual peak,” but my man just needs to learn to lay back and enjoy the wild ride. 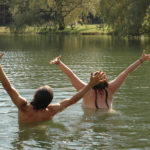 How to NOT Skinny Dip 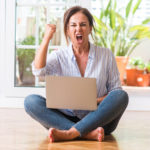