For the next few minutes, I am going to permit myself to be the kind of annoying, nit-picky person that I usually keep in cuffs in the most secret part of my mind. (Because I don’t want everyone to hate me.)

A few phrases that are splattered wantonly across the internets—Facebook, I’m looking at YOU—irritate the crap out of me. If only one person had typed any of these word combos, it would have been quirky and unique. However, rampant overuse long ago bleached these expressions of their ironic appeal.

In the interest of full disclosure (and because I don’t want to be a hypocrite), I have to confess—oh my God this is so embarrassing—I have typed all of these phrases at least once. But, in my defense, as soon as I realized how overused they were, I stopped. As we all should.

Annoying example: “You are the greatest person who ever walked the face of the earth. That is all.”

Better: “You are the greatest person who ever walked the face of the earth.” <<< THIS IS ACTUALLY MORE IMPACTFUL. Because it actually is “all.” You didn’t have to explain that what you just said was “all.” It just is. Now shut up about it already.

2) “Just sayin’.” Most people who say “just sayin’” are not “just sayin’.” They have what they perceive to be a mountain of inarguable evidence as to the rightness of their convictions behind their concise and well-thought-out argument. Their truth is obvious and YOU ARE AN IDIOT FOR NOT “GETTING IT.”

Annoying example: “This whole ‘ice bucket challenge’ is nothing but a thinly-veiled ploy for bloggers and media people to drive more traffic to their sites. Just sayin’.”

Better: “I think this whole ‘ice bucket challenge’ is nothing but a thinly-veiled ploy for bloggers and media people to drive more traffic to their sites.” <<< See, you can still say what you think. But you have to say “I think” – because it’s your opinion. Remember? Like assholes? Everybody’s got one? Saying “just sayin’” does not negate everyone else’s opinion and suddenly make you right. Just sayin’. (Meheh, kidding.)

3) “No offense.” If you have to say “no offense,” then you are definitely about to say something offensive. And you’re an asshole. Offense intended.

Annoying example: “Your kid is annoying. No offense.”

Better: “….” (<<< in case you’re confused, watch Bambi and listen to what Thumper’s mom tells Thumper after he disses Bambi’s “I was literally JUST BORN, you asshole” baby fawn attempts at mobility.)

Better: “Here Comes Honey Boo Boo is the greatest show on television.” <<< You’re still wrong, but at least you didn’t make yourself look like an even bigger asshole by typing out the word “period” in addition to typing… an actual period.

5) “Just a thought.” Well obviously. Isn’t everything we say “just a thought?” Is there anything a person could ever say that wouldn’t be a thought?

Annoying example: “Hey husband, how about maybe doing what the GPS says instead of assuming that your brain is more powerful than all the Google satellites? Just a thought.”

Better: Actually… never mind. The above example was perfectly reasonable in this instance. Everyone knows you should listen to the freakin’ GPS. But still, we ought to use “just a thought” as sparingly as possible, and only in instances where extreme sarcasm is deemed necessary, as in above.

Now go forth, enlightened grasshoppers, and paint social media with your much-less-annoying words. 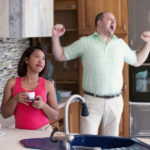 Can I Be The Dad? 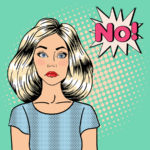 No, I don’t Want to Hear About Your Multi-Level Marketing Scheme