I sat on the closed lid of the toilet, cursing the New York Times crossword for making my brain ache. Heck if I knew the six-letter word for a “distressed Biblical character.”

It was bath time, and as I cracked the crossword clues, my three-year-old son splashed and noodled around the tub, charmingly occupied with trilling the ear-splitting siren song of a mermaid, carving sculptures into the bubbles with his breath, and pushing a sail boat through a tsunami “of scary wild bigness that I made with my feet.”

Eventually, I noticed the tsunami had stilled. The kid was quiet—suspiciously quiet. His eyebrows were scrunched together, and look of puzzlement screwed up his face. His hands, which had been waving around wildly as if they were in a blender, were now out of sight.

“Mom?” he asked, after a few focused moments.

Distracted by the crossword, my brain didn’t expect a significant response. At most, I figured he was going to send me downstairs on a Goldfish run so that he could populate his personal ocean with gradually melting marine life. Groaning internally, I imagined pouring a vat of Drano down the pipes during that bitch of a clean-up.

However. His response was a loaded question.

“What are these little bumpy things underneath my pee-pee?”

Well, well, well.  Although I’d spent the last few years wiping those little bumpy things every day during diaper changes, I had figured the terrain of his body was something we both would take for granted for at least another decade—until he hit puberty and spent long hours alone in his bedroom, panting out a “NOT NOW” whenever a poorly timed knock rapped on his door.

His discovery was a natural one, though, and it didn’t deserve a fluttery response of “Can someone bring Mommy her smelling salts?” It deserved a straight answer.

Inhaling deeply, I composed myself. “It’s time you asked, isn’t it? Those are usually called ‘balls.’”

We paused the conversation to share a mutual chortle. Balls. That’s just funny.

“To put a finer point on it, dear boy, they’re more technically known as ‘testicles.’”

Even when I’m a bit off balance, I like to use elevated phraseology with the kids, such as “to put a finer point on it” and “technically known as,” in the hopes that they will adopt my figures of speech and sound precocious in public, thus causing strangers in the produce section at the grocery store to coo over their remarkable intelligence.

Carrying on, I asked, “So you found your testicles down there, under all those bubbles, eh?”

In truth, I didn’t mind having this conversation; if my three-year-old wanted to talk genitalia, then I wanted that talk to happen with me. It was just that I hadn’t seen this particular “first” coming. We make much of wanting to be there for our children’s “firsts”—first tooth, first steps, first words, first solid food, first time sleeping through the night. As they grow up, we still want to be there for the big moments, from riding a two-wheeler, to having a sleepover, to crossing a finish line. Bearing witness to the “firsts” is not just a way of tracking our kids’ milestones and taking stock of development; it also restores the big-picture perspective that is so often lost in daily minutiae. “Firsts” remind us to feel the joy.

But still. I hadn’t been prepared to engage in extended discourse the first time my son lovingly clutched his balls.

All too soon, his body would become his own, a place of privacy, and such moments between us would be inappropriate. We were on borrowed time when it came to sharing our bodies openly and innocently with each other. Suddenly feeling quite fortunate—thank you, bathtub gods, for giving me this unexpected “first”—I grinned and complimented him. “Nice job with the treasure hunt, buddy.”

Pleased, he affirmed, “I did find my tesscals. And Mom? They feel like little beans.”

You have to love a kid who knows his legumes.

“Well, yes, I suppose they do. You surely do like beans on your quesadillas at lunchtime, don’t you?” Shifting back into normal parent mode, I carefully drew that connection. As bath time had just demonstrated, we never know where or how a light bulb can be turned on.

“I really do love softie beans on my quesadillas, Mom.  And now I’ll always have some with me.”

After that reassuring observation, a quiet fell over the bathroom as I returned to massaging the Sunday crossword puzzle and he his loins. 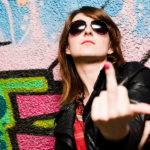 Competitive Firsts Can Suck It! 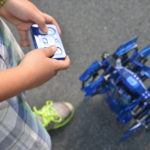 Impressing the In-between Ages with Hexbug