So many things are celebrated now that weren’t really a big deal when I was a kid.  Grade 8 graduation involved a new dress, but it was cotton.  There was a dance in the gym but we didn’t take the day to get our hair and nails done.  Now the girls make more preparations for the occasion than I did for my own wedding.  Kindergarten graduation wasn’t even a thing at all.  Birthday parties involved pin the tail on the donkey and a money cake if we were being especially fancy.  Now they involve giving your guests an “experience,” and dollar store goody bags have been deemed not good enough.

But there are other things that were a big deal in my youth (Lord that makes me sound so old and cane-waving), that seem to be no big deal anymore.  A trip out to buy my first bra was equal parts mortifying and empowering.  On the one hand it meant that I was a giant leap closer to being an adult, or at least able to watch any damn movie I pleased.  It was a rite of passage into womanhood.  A world full of mystery that boys didn’t get to be a part of.  A new section of the store awaited, and a whole section of my top drawer was ready to be dedicated to this new category of undergarment.  Bye bye babyish undershirts and hello grown-up bras!

Clearly I was delusional.

At this stage in my life, most of my day is spent thinking about when I can get away with taking off my bra.

Along with the excitement was a good dose of terror and humiliation.  Aside from the late developers, the girls in my class tended to wait until they absolutely needed a bra before venturing out to the store.  So it was with some reluctance that I headed down to the lingerie department of Sears, Robinson’s or Eaton’s.  I don’t remember which one.  Probably all three, just to prolong the ordeal.  Of course we had to run into a neighbour who just thought it was the sweetest thing that little Tara was out buying her first brassiere.  Kill me now.  My mother motioned to the lady who worked there, who was definitely a 60 year old shot-put coach, to come over and measure me.  Luckily the woman distracted easily and I was able to hide in a rack of flannel nighties until she was gone.

When I finally got home, having barely survived the ordeal, I begged my mother not to tell my dad.  I would surely die.

She totally told him.

I think he would have preferred being on a need to know basis as well.

It’s okay though because those events were just preparation for the days I had ahead of me at school.  Back then the girls wore between 9 and 32 T-shirts in order to conceal that we were wearing a bra.  We looked like Michelin men lobbing around the gym.  But that still didn’t stop the boys from shouting out “Tara’s wearing a bra!!” right before the old snap of the bra strap.  Don’t worry, I wasn’t getting any special royal treatment – they did it to all the girls.  And this was in Catholic school.  Where were those nuns when you needed them anyway?

Fast forward to the present day, when I find my 8 year old asking to buy a bra for under her volleyball shirt because her friend has one.  I said no initially.  But soon we found ourselves in Justice, buying things with glitter, glitter and more glitter.  They had little sports bras that were 3 to a pack right by the change rooms so I told her she could try them on.  The next thing I knew we had bought her first bra, and there was no more ceremony about it than there was in buying a pack of gum.

I felt a little sad that this rite of passage wasn’t more notable, but also glad that there aren’t the hang-ups for her generation about a simple piece of clothing.  Most of all I’m relieved that I kept her out of Victoria Secret – she’s been eyeing their store Pink since she was 5.  She says it’s her favourite store.  I might need those nuns back to say a rosary for us. 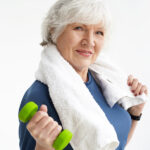 I Joined The Old People Gym 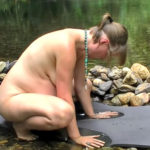