I was at the intersection of “wtf just happened road” & “how do we move forward from here street.” I’m the mom of an affectionate, witty, intelligent, eleven-year old smart ass. Yes, he is all of those endearing adjectives & more, but he is also a grade A smart ass. In his brief years on earth, he’s managed to acquire boat loads of sarcasm and social swag. This may not be a bad thing but the verdict is still out.

Soccer is his thang. He lives it. He breathes it. Soooo because I am “that” mom I watch games with him when our schedules allow. The other day over popcorn and giggles we were watching a big match between Real Madrid and Bayern Munich. These are two popular teams in the world of soccer aficionados. The game was a goodie, even if you could care less about sports, let alone soccer. In a pivotal action sequence during the game there was a breakaway play in which Marcelo, Real Madrid’s Defender had an open field and pushed the ball towards the goal. He was within striking distance and surprisingly (to me) passed the ball to Ronaldo, their star player. Ronaldo then scored. We cheered and high-fived. I looked at my eleven-year-old soccer guru and said, “Why did Marcelo pass instead of take the shot?” This child looked at me without flinching and said, “Cause he’s not an asshole.” Yep. Let it marinate.

There I was sitting in a haze of shock & dismay, tinged with a hint of anger. I was reaching for pearls I so desperately wanted to clutch. I was thinking, “has the boy lost his damn mind???” However, within the same range of emotions emerged a feeling of acceptance and reflection.

I’m a child of the 1970’s raised by two parents from Brooklyn, New York. My parents were raised by mothers from the pre-everything we do now South. Beat downs were handed out with swift ease. Children would not fathom cussing in front of their parents. If on the off chance one went rogue and let an expletive out there is no doubt they would have seen Jesus, Mary, Joseph & their great granny waiting for them at the pearly gates. I’m an adult with bills, a mortgage and endless responsibilities and I still do not cuss in front of my parents. It’s just something that I would never do. Ironically, it’s the way I was raised. So here I am with my own boy cub listening to him being slick with the tongue. What’s a mama to do? After searching within, I looked at the incident from a perspective I was not expecting.

The humor in the experience is Mr. 11, was spot on. Only an asshole would have taken the shot and not passed it. Marcelo is a Defender, that is not his role on the field. He did exactly what a savvy player would have done. Get it to the super star of the team and let the magic happen. Get the assist and keep it movin’. But how did MY boy put it into context so quickly? How did he pull out the perfect word of “asshole?” That’s talent folks. What other cuss words does he put into context when I’m not around? Is he using the f-bomb with his friends? Is he telepathically telling me to fuck off when I yell at him to turn off the Xbox? Ugh, the questions were endless. I was also feeling mommy guilt. Maybe I should get old school with it & wash his mouth out with soap (that’s so ridiculous). Maybe I should have spanked him over the years (well, there was that one time at sea world). Maybe it’s from all the unedited Biggie & Nas he’s heard in my car (necessary education). The pervasive societal voice of “these kids have too much” and “get away with too much” was drowning out my own very strong opinions. Then, some out of left field thoughts about my style of parenting leading to roads of debauchery persisted. I started to second guess and vacillate about whether handing out a harsh punishment after the “big conversation” about appropriate language was the move. It all gave me a migraine. A glass of pinot noir please. After thinking it through, meditating and listening to my inner voice, I did absolutely nothing. And that felt right to me.

I had to decide what was important to me with my relationship with my son. Taking an action that involved scolding, punishment or worse didn’t feel right. What felt right was that I have a son who trusts me and feels comfortable with me. He didn’t hinder his speech in front of me. He didn’t edit his thoughts because he knows with me there is a safe space for him to be free. Don’t get me wrong, he does have the fear of his mama. He knows there is just some shit I will absolutely not tolerate. And being a disrespectful, entitled, crass young man won’t go down in this house. But you see, he is not those things and never will be. I’ve done the hard part. I’ve placed the right amount of fear into his little brain. More importantly, I’ve laid the foundation for openness, trust, laughter and room for us to grow in this relationship together. This is only a quasi-dictatorship.

I have always wanted to raise a boy cub that was courageous, compassionate and God fearing. I did. And he is. I’m learning as I parent and he is learning as he grows. This is just the beginning of this tween to teen journey but I like where this relationship is headed. I’m going to continue to be the judge and jury in this household but I’m also going to remain his biggest cheerleader, motivator and supporter. The new soccer season is upon us and as we sit and watch with popcorn, I look at Mr. 11 wondering what expletives are floating around in his head in this game.

Kai McGee, J.D. is a writer and photographer. Her work has appeared on MyBrownBaby.com. She is also a breast cancer survivor who actively volunteers with The American Cancer Society’s: Reach to Recovery program. In her past life, she was a lawyer/executive. When she’s not writing, she enjoys traveling and lazy mornings in bed watching the food network. She resides in South Florida with her tween son and canon camera. 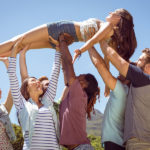 Less Is More: Why Single Moms Should Keep Their Support Groups Small 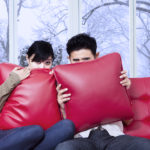 The Best Excuse to Avoid Weddings  (Use Your Kids)