Today my daughter and I entered a dreary little shop that sells everything from cereal to high price hairdryers. The upstairs is devoted to toys. TOYS! They are of the dusty, oh-god-did-a-child-slave-laborer-make this sort, but lately my child has fixated on this upstairs plaza as a dream world that possesses the one thing she wants more than anything else in life: a hula hoop.

Where do you want to go? I asked her. I want to hula hoop! I sighed. I could think of no less enticing a location than the dusty corner shop. But it was not a large request.

My daughter’s hair has grown a lot since last fall, when she asked me to stop cutting it. It flops in her face like Cousin It’s if it isn’t brushed back. We buy barrettes to keep it out of her eyes.

My daughter has a small box labeled Bows in her closet. She loves them sometimes and is utterly indifferent to them at others. The same could be said of every other toy or object or person in her life; she is a two year old. This morning, she was indifferent, and as she finished her cereal I took a comb and swept her locks out of her eyes, using those convenient sliding bows to free her vision.

She had a blue bow on one side and a yellow on the other. We walked into the shop and the manager, who knows her fairly well said hello. Hello! I responded. I’m very nice. Ask anyone. I dislike people who aren’t instantly warm. I don’t understand them. I love a good hello.

Then he smiled at my two year old approvingly.

She has bows in her hair today, he said. They look nice. She’s a little princess.

Oh my GOD, there is that FUCKING word again.

This isn’t about Disney. (That’s another bone to pick.) It isn’t about gender neutrality and letting my daughter have soccer balls but not baby dolls (she has both.) This isn’t about frills, even, or the word “girly.”

Here’s the trouble: we don’t know precisely what it is about. I do know that I feel MURDEROUS when people call my child “princess.” It may have something to do with its happening 800 times a day. It may have something to do with there being no label that I’ve ever heard attached to boys. (Not that any child deserves to have an adult label them in any manner.) It may be that I am sick of people speaking mindlessly. What is a princess, anyway?

According to Merriam Webster, a princess is the eldest daughter of a British sovereign —a title granted for life and used only after it has been specifically conferred by the sovereign.

It would be nice to be British royalty. This morning the coffee maker was cranky, two of our stove burners were broken and we had to leave a message for the super so my husband can make his morning tea while I make the morning oatmeal simultaneously. This morning I realized the paint on the radiator pole in my daughter’s bedroom was badly chipped and cracking and needed to be sanded before the heat comes on this fall.

I’d LOVE to ring a bell or do whatever it is that British royalty do to solve these problems. They don’t even know they have these problems, of course, as they are fixed without their knowledge. I’d love to receive messages on silver trays in bed and have the sheets washed before they get dirty and whatever else happens in the life of a royal.

HOWEVER, my daughter is not a British royal. Why, then are people calling her one?

Shoot, this is about Disney. Some asshole at the Disney Corporation decided a few years ago to capitalize on children’s natural desires to dress up in their parents’ clothing and so he commodified it. He sent out the Disney troops to make piles and miles of land-fill crap consisting of costumes.

Why on earth would you go to the trouble of crafting a costume from a necklace found here, a hat found there, if you could just go to the bloody story and plunk down $24.99 for a piece of cheap fabric trimmed with chiffon and tulle and a cheap golden crown and wand, entombed in more land-fill filling, off-gas producing vinyl? It defies common sense to make a child work so hard at pulling an outfit together when they can just buy it, for god’s sake.

Trillions of dollars later, we have plates. We have cups. We have Little Golden Books. We have the aforementioned costumes and their junky paraphernalia. And beyond the damage to the planet, we have conformity, in greater numbers than ever before. (Don’t fact-check me on this, I am an angry parent and it feels right. It is intuitively right.)

That is my biggest problem with the label. You are some strange, undefined thing that apparently every other girl is too, if you are to believe the words of strangers who think they have a right to call you anything at all, which they do not. I repeat: they do not.

I whirled on the manager.

Do me a favor. Do the world a favor. Stop calling girls “princesses.” You don’t know the damage you may be doing. More importantly, I don’t know the damage you may be doing. I don’t even know what you mean, and my daughter doesn’t know what you mean except that somehow you approve of her more today because she is wearing bows that culturally signify her as a girl, and that makes the world a more controlled, defined place for you. Guess what? The world is not a neat and tidy place. It is not a place where all girls are one way. I am so sorry to make you anxious. But leave my daughter out of this society’s pathological need to label girls anything, anything at all. Leave my fucking daughter alone.

Anyone who knows me personally knows this is not only exactly what I said, but it is the abridged version. I had more. I told him he was free to ask her name, to tell her that he hoped she had a nice day, or that we enjoy the toys upstairs. What he was not free to do was call my daughter a fucking princess.

I am not waging war against all gender stereotypes. It’s too much to take on. I have no idea if the genders are different, and if so, to what extent it is biological. I just bought a book called Why Gender Matters, actually. I certainly want to know if there is science to help me understand and guide my daughter with any problems that may arise from her brain chemistry.

The human heart and mind is awash in riddles. Each person has a lifetime of dealing with her own riddles and the riddles of those she encounters intimately and casually. It is, to be trite, the human condition to be uncertain of another person’s identity, which encompasses everything from taste in music and movies to talents and dreams and whims, to kindnesses and cruelties.

We cannot appease our society’s anxiety over complexity by allowing people to continually address our daughters as “princesses.” We cannot allow our daughters to be confused by a meaningless, vague, thorny and insidious label. We must yell at shopkeepers who are brainwashed by a society that is pathologically terrified of letting girls out of the box.

When my daughter gets older, she will make lots of decisions that will reflect the light of the prism we call identity. She may be a makeup-wearer. She may be a soccer player or an introverted writer bent over notebooks in a research library. She may be a dancer or a doctor or a restaurant critic. She may be a street clown. She will work all sorts of odd jobs and stumble and fall and wonder who she is, the way the rest of us do. I don’t intend to allow her private ruminations to be short-circuited by meaningless, soul-gutting labels.

If she does, however, become the eldest daughter of a British sovereign, I expect her to get that heating pipe in our second bedroom fixed. And I’d love my tea on a tray by 7 am.

Leslie Kendall Dye is an actor and dancer in NYC. She has one very patient husband and one impatient three year old who has inspired her to write, although frequently not about children or motherhood. She worked as a part-time nanny in Manhattan for many years, which provided much joy and many punch lines. Her work has been featured on The Huffington Post, Off The Shelf, Erma Bombeck Humor Writers, Mamapedia, Blunt Moms, Nanny Magazine and others. You can find her at hungrylittleanimal.blogspot.com, on Facebook at https://www.facebook.com/hungrylittleanimal or Twitter at https://twitter.com/HLAnimal. 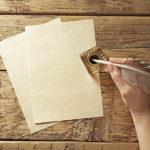 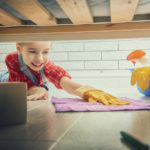 The Politics of Family Cleaning Chores