I was in third grade the year my sister bought me a birdseed bell for Christmas. I still remember unpacking that 16-ounce seeded bell on Christmas morning, expecting something else in its place.

The look on my face must have been utter horror as I pulled it out of the box, wondering in my addled 8-year-old brain what exactly I was supposed to do with a birdseed bell. Eat it? Ring it? What I now imagine is that I likely wanted to lob it at my mother and sister’s face, right between the eyes, as Rudolph the Red-Nosed Reindeer played in the background.

Only a few weeks earlier, in anticipation, my sister and mother had made me stay in the car as they visited a local gardening store. It was the kind of store that carried odd things, beyond gardening, and since I desperately wanted a hamster, I was certain they sold hamsters.

I was convinced my sister and mother were fulfilling my top-list item – a lovable, lively hamster I would name George.

It wasn’t the first time, nor would it be the last, my mother failed in the gift-buying department. Ultimately, she was the culprit behind all of the bad buys. One year she steered my older brother to buy me and my sister matching purple and white striped, knitted ski caps with purple pom-poms that looked like something my weird grandma might have worn only on a bad hair day, after a stop at her local beauty shop had rendered her hair blue.

Too often, my mother’s choices ended in tears, disappointment and more importantly a feeling that somehow my family did not know or understand me.

Another year, I wanted a Mattel Barbie Styling Head Beauty Center. A long, fancy name for what was all the rage in the 1970s. It was a life-sized Barbie head on a Pepto-Bismol-pink platter – a cheap plastic platter with makeup so you could sharpen your grade-school hair and beauty skills. Simple enough.

This year my mother would get it right. I made out my Santa list early. There was plenty of time for her to purchase my heart’s desire.

Ripping paper off my gift that Christmas morning, I reached in and pulled out a black Mattel Barbie head. My mother explained: “The blonde Barbies were all sold out.”

I learned something then that later Oprah would talk about during her most popular years on air: white makeup doesn’t do a damn thing on black skin. So all my dreams of trying out my makeup expertise were lost because the stuff was invisible on my black Barbie – rendered useless because Mattel had not bothered to test, or didn’t care, how makeup made for white skin would work on a black plastic model. The crayon-like wax lipstick and eye shadow remained hidden, no matter how hard I tried to crayon it on.

I don’t know why my mom had such a difficult time with gifts, but she did. I do know in time I became ultra sensitive to making sure I purchased the desired gift for the recipient. But even in my efforts, I too can recall some near flops.

One year, long before the Apple craze had reached its present heights, my child asked for a shimmery sea foam green iPod, one that today seems reminiscent of another era. She made out her Santa list, down to the color and style and exact model. And yet not many days later, I found myself in a long line of shoppers with a silver matte, not green, iPod in hand. My excuse: it was cheaper, and it was in stock.

As I inched toward the crowded counter, I remembered my daughter’s detailed list. More importantly, I remembered the birdseed bell. I recalled how I hung it in our backyard that winter, not really knowing what else to do with it, still dreaming of the mythical hamster George and his exercise wheel that never was.

It struck me that I was doing the very thing I swore I would never do – choosing a gift without the receiver in mind. I quickly exited the line, returned the silver iPod to its shelf and decided I would go online to order the sea foam green model.

That birdseed bell has saved me many a time, ringing loudly in my head, reminding me the receiver must be seen and heard and understood. If I can accomplish that, my gift is truly a gift worth giving. 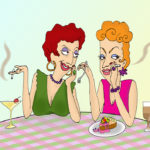 To The People Who Hate Kids – An Open Letter 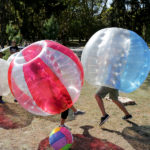