When you’re from a culture devoid of Easter traditions or have lived long enough away from home, the onslaught of colorfully wrapped eggs,  (HOLLOW!!!) chocolate bunnies, and the culinary atrocity called the peep all seem truly alien and utterly ridiculous. These ‘treats’ along with synthetic grass stuffed baskets are enough to make one wonder: What The F*ck People? Have you been inhaling too many Teflon fumes?

No matter how you look at it, Easter in its current form makes jack-all sense.

Let’s take a step back. Imagine you’ve just landed from Deep Space Nine. Unlikely, I know, but then so is a rabbit delivering eggs all around the world. ( In fact, my alien is more probable than said rabbit.)

So you get here and you’re wondering: “Why all the rabbit worship?” From your observations, it’s a small, furry animal, mostly known for its copious poop and cowering in the face of predators. So you ask a local human and they sit down, straight-faced, and tell you that on a certain day each year, a rabbit brings chocolate eggs to celebrate.

You are likely either scratching your head at this point or waiting, eagerly, for a punchline that never comes.

You are probably wondering why humans chose a rabbit as a mascot instead of, say, an animal with a bit more stature. Maybe you’re simply stuck on the rabbit bringing eggs; I know I am. It would be fair to assume that the Easter committee assigned to merging religious and pagan holidays had been siphoning-off the altar wine for some time when they came up with this plan.

It’s also unfathomable that we celebrate a man, who successfully rose from the dead and moved a massive boulder after a number of days without food or oxygen, with some cheap-ass chocolates.  At MINIMUM, we should be breaking out the Dom Perignon.

At this point, having done your research, you point out that in some European countries, bells deliver the chocolates while ringing to celebrate Jesus, aka the lamb of god (and we will get back to that nifty nickname) and his resurrection.

Our human, who may be slightly flustered at this point, tries to buy some time and excuses themselves to check on the traditional Easter meal: lamb roast. And now we’re talking cannibalism infiltrating what started as a very sweet story about a rabbit and some chocolate.

Really, who thought lamb as the meat of choice for Easter was a good idea? Did our committee really think honoring the man who gave his life for their sins by figuratively eating him was, well, appropriate? Mind you, most of these folks will have just come from a service where they believe they literally ate him so perhaps this isn’t so far fetched after all.

And clearly cannibalism is acceptable, given that the rabbit is delivering chocolate effigies of himself. He is saying: eat me.  And since I prefer savory food, I decided to follow his lead and serve him up directly with some Dijon mustard.

A final thought on Easter: I am told it evolved from a  celebration of Ishtar, a goddess of fertility and sex. Weheyey, now we’re talking! So rather than stuff our faces with crap quality chocolate, let’s give Jesus his dues and celebrate with some champagne and sex.

Mum of two, writer and badass baker by day, vodka-swilling samurai by night. 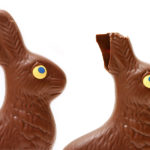 Teaching Our Children About Taxation at Easter 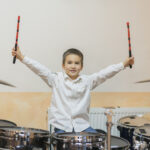 To the Guy Who Remembered His Pants