I once had a mental breakdown over a set of ramekins.

Of course, this isn’t just a story about bakeware, or even my unnatural attachment to inanimate objects. This is really a story about stress, familial judgement, and marriage.

This is a story about my in-laws.

I learned early on that in order to survive my new family I was going to have to let certain things go. Spending large amounts of time with anyone means riding the roller coaster of their mood along with your own. My mother-in-law is a walking amusement park. I once turned down her offer of a cup of tea and was shunned for a week. I once admitted I don’t eat pork and was later served white mystery meat slathered in gravy and told it was turkey. It was not. We danced this delicate waltz, and we kept circling each other like boxers in the ring.

Eventually, we settled into a familiar antipathy toward one another. She referred to me mostly in the third person, and I hid behind my children using them as a human shield to deflect her comments.

We coexisted in almost-civility for years, until they came to visit for two weeks when my youngest son was a month old. Obviously, I hadn’t been sleeping and I’d also been battling a particularly stubborn strain of thrush on both me and the baby. We were both on more medications, herbal and pharmaceutical, than I could list. There couldn’t be a worse time for a visit, but Hell hath no fury like a grandmother who isn’t invited to see her new grandchild.

If this had been a weekend visit, I might have made it out with my dignity and sanity intact. Sadly, that was not the case. My in-laws live in England and when they fly halfway across the world for a visit they plan on getting their money’s worth.

Four days into the visit the trouble started:

Mother-in-law: Is Mary ok? She seems really pale lately.
Me: *standing about a foot and a half away* I’m fine. This is just how I look.
Mother-in-law: I thought Mary was trying to be a writer. I haven’t seen her book in the shops.
Me: Well, I DID just have a baby.
Mother-in-law: I know Mary said she didn’t want the two-year-old eating sweets, but I figured that’s what grandparents were for.
Me: *grinds teeth and walks away*

I found plenty of opportunities to escape, claiming to nurse the baby or take a short nap, which sometimes meant hiding in my bedroom watching trashy television.

One day I came down from one of my naps to find the entire kitchen rearranged, my groceries discarded, and new ones put in their place. How long was I asleep? I could feel my eye start to twitch. I pulled plates out of cabinets and dumped the now horribly mixed-up contents of utensil drawers on the counter. Then I saw it: the dish that launched a thousand meltdowns.

On the floor was one of my extremely expensive, imported from Paris, pristine white ramekins, filled with wet dog food. Never mind that we don’t feed our dogs canned food. I couldn’t focus on the health of our pets at that moment. I had tunnel vision and it was starting to turn red.

I’d mentioned to my Mother-in-law in the past how special these dishes were to me. We’d even had little spats over that they weren’t really meant for daily bowl use, and they should not, under any circumstances, be put in the dishwasher. I’d hidden them on the top shelf in the highest cabinet in the kitchen to keep them out of her reach.

My Mother-In-Law doesn’t stand a hair over five feet. How the %*&# did she find them?!

I lost the ability to form rational thought. I grabbed the dish and started washing it angrily. In fact, I was scrubbing it a little too angrily. Postpartum hormones, sleep deprivation, and blind rage are not a good dish-washing combination. The ramekin slipped from my hands and shattered against the sink.

I’d lost. I’d lost my dish, I’d lost my kitchen, and I’d lost my mind. I slumped down on the floor in front of the sink, water still running, and I cried big, body-racking sobs of despair. Between a demanding newborn, a vicious yeast infestation, an attention-starved toddler and a meddling Mother-in-law, that dish was the last piece of control I had left over my life. And I broke it.

My husband and his parents came home from the park to find me crumpled on the floor muttering about dog food and ramekins. My husband quickly ushered me into the bathroom. When I finally calmed down enough to explain to him what happened, he laughed. Is that all? At the time I wanted to punch him in the nose, but looking back it was exactly what I needed to hear.

They were just dishes, and my in-laws were just visiting. My house was still my house and my life was still my life. The dogs could go on a diet. The only thing truly broken was a piece of glass. I’d like to say that I emerged from the bathroom a wiser, more Zen version of myself. Unfortunately, that was not the case. I hid there another fifteen minutes before skulking back into the kitchen and loudly rearranging my kitchen.

Once the kitchen was returned to glory, I felt better. I even resisted the urge to use the ramekins make vindictive revenge soufflés for dinner for everyone except her.

Sadly, I have to admit, I haven’t used my precious dishes even once since the incident occurred. I only thought of it today because my in-laws are arriving for their annual visit next week. Almost a full year postpartum and much more rested, I’m sure I’ll be in a much better place to deal with the stress of the next British Invasion.  I bet even the Beatles were less demanding houseguests.

Of course, I boxed up the remaining three ramekins and hid them in my closet. Just in case. 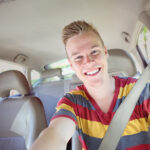 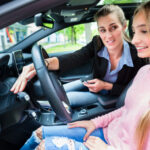 Mom in the Passenger Seat 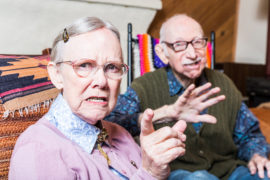