Your mother embarrassed you when you were 13. Of course, she did. All mothers must heed the siren’s call. We all have our own brand of horror– my mother’s manifested itself visually: public displays of curlers and bathrobes. Mine is more verbal in nature, as evidenced below…

1. Watch her face crumple as you refer to Ice-T as “Iced-T” and M.C. Lyte as “McLyte” because of course, Scottish rappers.

2. After the Starbucks barista asks me if I have an “outie” and I snap, “that’s a totally inappropriate question!” my teen hisses, “Mother, stop. He’s talking about your CAR.” and she gestures to the “Audi” key in my hand.

4. Well, I’m SORRY dude. But if you’re gonna wear a red shirt to Target, I’m gonna ask you where the tampons are. Wonder why teen is hiding behind the ironing boards.

5. Watch inappropriate movie full of dick jokes, take a deep breath and announce you’d like to “talk about what we just watched” and watch her cartoon-run right out of the room.

6. Take teen to buy pajamas at Victoria’s Secret and impulsively decide I need a new bra. Approach first official-looking person I see and blurt, “I think I’ve been wearing the wrong bra size for years, can you measure me?” And teen points out, “OMG Mother, he’s the security guard.”

7. Employ teen slang in the mundane: We are LEGIT having meatloaf for dinner. It’s going to be SAVAGE AF. And after dinner, we’re FINNA SKIRT to Target!

9. Sometimes it’s the simple things: Walking down the street, neighbor says “Hello.” I say “Hi.” Teen: “OMG that was so embarrassing!”

10. Want to come off like a creep in the school pickup line? Inadvertently leave your back window open while cranking “Don’t Stand So Close to Me.”

Janice Ricciardi is an exotic Canadian, married to a New Yorker, raising daughters in San Francisco. She used to talk on the radio but now finds herself writing kids’ names on bananas with Sharpie and vetting the American Girl book about periods.

She is Co-Author of the parenting book “Lose the Cape: Ain’t Nothing but a Teen Thang” which hit Top 5 parenting books on Amazon.com Spring 2018. 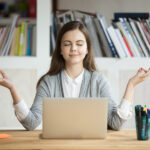 When Self Care Means Turning Off The News 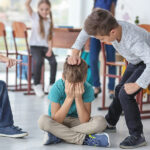 The Darker Side of the Moon: What Does Being a Mother of a Bully Feel Like?