I can never forget the day our doctor told us that my daughter has cerebral palsy. I, along with my husband, was planning a trip to the hills with our kid for the upcoming holidays. The news hit me like a truck. It was a week before Christmas and the entire city was teeming with festivity.

I could see happy faces all around me which probably made me feel even more miserable. Or should I say angry? Both. I guess.

Jennifer was only three years old when she started showing the symptoms of cerebral palsy (CP). At her age, tots of my friends and colleagues learned to walk, Jenny didn’t. She could barely hold herself upright. Instead of speaking like a normal 3-year-old, she could only make some basic noises. Truth be told, I didn’t take all these too seriously at the beginning.

My mother used to tell me that I was later walker and talker. So I thought these delays were in her genes and brushed all my worries away for the moment. But you know, I am a mother after all and in my heart, I could sense that something was wrong. My child was suffering and she couldn’t even express it.

My brain said, “You are worrying too much, you probably need a break, go on a trip or something.” But my heart said something else, something I wasn’t prepared for, something I didn’t want to hear at all.

I ignored my motherly instincts not because I was ignorant of my child’s condition, but because I was too afraid of the upcoming reality that came crashing down on me a few weeks later.

Eventually, I consulted two of the best pediatricians in our city at that time. One of them recommended a neurologist as Jenny’s muscle control and coordination was in shambles. He performed a couple of neurological exams and reached the conclusion that she was in an early stage of CP.

I clearly remember that I was almost about to burn those MRI and CT reports to ashes if it weren’t for my husband. He was just as gobsmacked and broken as I was, he was just better at hiding it.

By the time her 7th birthday came up, her lower torso and the left side of her face was completely paralyzed. Jenny is a sensitive girl. From that very young age, she knew what was going on with her, the social stigma associated with it and most of all, how it was affecting her parents.

I always tried my best to hide my pain but she could see right through my soul. She didn’t let us celebrate her 7th birthday, she still won’t. You know what we do on the birthday every year?

We order pizza with extra cheese and soda and watch movies. Then till late night, she, my husband and I talk. Just talk and listen to each other. No bedtime rules for that one night of the year.

I guess Jenny has made peace with her reality. Even though those MRIs say that something is terribly wrong with a few parts of her brain, she is the most emotionally strong and mature person I know.

She can’t go to a regular school, she doesn’t have more than one human friend (she has two dogs, though), she can’t participate in most activities with other people of her age. All these things made me go paranoid at one point. I was sad, I was helpless, and in rage, too.

I even sometimes wished she weren’t born in the first place. I know it is too harsh but I couldn’t shake this feeling. I had to quit my job to take care of her. My husband and I couldn’t afford a nurse or nanny who is qualified to take care of a child with severe CP.

Who would look after her after we die?

This one question breaks all hell loose inside my mind. I want her to live a long and happy life. She deserves it. She is a good kid. I also know that she blames herself all the time for her parents’ misery. She is just great at hiding it.

But hey! We survived and are still surviving. My daughter is going to turn 13 tomorrow. I bet she is going to be the smartest and humblest teenager ever. Being stuck to a wheelchair for eternity hasn’t stopped her from learning. Her room is a mini library, already. Her taste in music at this young age surprises me all the time. After all these years, I think she has taken care of me more than I took care of her.

For her birthday tomorrow, I have two gifts for her.

One, The Batman Adventures: Mad Love.

And two, I am taking a vow to be at least half as positive as she is about life.

Now, would you too stop getting paranoid, go to the kitchen and make two tall glasses of double chocolate milkshake? One for yourself and another for, well, again yourself.

Alvina Emmy is a dynamic mother, always on the lookout for fun activities with her precious daughter and fun-loving techie husband. She is keen to share everything that she has learned on her site Parentloves.com 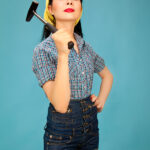 Every Woman Needs a Hand Tool 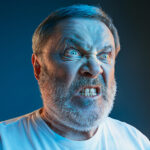 What is in The Water in Alabama?