During a conversation with some friends I started thinking about how my views on child-rearing have changed since having children of my own. Despite my best efforts, I have become one of those moms who only hangs out with other mothers. On the one hand, it’s comforting to know that they wouldn’t even bat an eyelash when my son farts, sticks his hands down his pants, and announces “no poop!” More than that, they would probably laugh and then compliment his bowel awareness.

Our definition of polite conversation is a sad shell of its former self. On the other hand, I realized that I’ve lost touch with that childless version of myself, who used to have other childless friends, and who had very rigid opinions on “the right way” to raise children. So I started thinking:

What would the 25-year-old me think of myself as a parent?

Before I had my first son, I used to use phrases like “My child will never,” “I will always,” and the dreaded “I believe.” I thought I had all the answers. I had it down to a science. I’d observed my friends with children, collected plenty of data on what I thought they did well and the things I’d do differently when I had children of my own. My husband and I had a plan.

Plan: that’s another word that has slowly been eradicated from my vocabulary since my kids came on the scene. A plan is just a idealistic and intangible wish for how a particular day would turn out in a perfect world. It’s a fantasy. It doesn’t exist. It’s a waste of valuable energy I could be using to hold my three-year-old down so I can get his shoes on him and out of the house before noon.

My children were never going to watch television.

I can’t tell you the number of times I made that promise. I would walk through the toy aisle of the store and remark with disgust the number of television and movie tie-in products marketed to children under three. There were princess dolls, princess books, princess cutlery, and even princess toilet seats. Because that’s what every potty-training toddler needs, to poop on the face of their favorite Disney character.

Boys weren’t off the hook either. There were Cars underpants, Cars cars (obviously), Cars stickers, and even Cars themed television sets: just in case the cars on the screen weren’t enough. I was horrified. I swore my child would never be indoctrinated into this billion dollar industry of scamming children and guilting parents into buying things they don’t need because Lightning McQueen’s face is on it. Did I mention the Cars themed beds?

I believed I was right with every bone in my body. Honestly, I still do. In principle. However, what I failed to appreciate was how useful a tool television could be when you need to cook dinner and your three year old is pulling on the leg of your baggy sweatpants, you’re having to hold the waistband so they don’t fall all the way down, the baby is crying in the high chair, and the dogs are barking at imaginary squirrels in the back yard.

The other day, I actually begged my son to watch some tv so I could put his brother down for a nap in peace without his “help.” And when my son was potty training and screaming bloody murder at the sight of a potty seat, going to the store and buying him the Lightning McQueen toilet seat actually helped. Does that make me a bad mother? A hypocrite? $20 poorer? Maybe. But sometimes desperate times call for desperate measures.

This was the key piece of information I was missing before I’d experienced parenting first-hand. Every day is a series of desperate times, some more desperate than others, but always calling for desperate measures. Disney is aware of this fact, even if I was not. They count on it. And though I may hate them for it, I need them. They have something I can’t live without, like a drug dealer. They know I need it, so they know they can charge me whatever they want for it. I’ll complain and whine about it, but in the end I’ll swallow my pride, bend over, and turn on Mickey Mouse Playhouse because it means I can have 45 minutes of calm in my otherwise manic life.

My children were always going sleep in their own beds.

This is something I have tried to stick with, and actually made it all the way to the second baby before giving in. My first son moved into his own room at two-weeks-old because he refused to sleep in a bassinet. He never slept in our bed. I would get up every night and nurse him in his room. Thankfully, he was a good sleeper and was sleeping through the night by the time he was six months old.

My second, on the other hand, was more of a grazer. He liked to eat every hour and a half, for five minutes at a time, 24 hours a day. Suddenly, the walk from my bedroom to his seemed a mile long. I would make my way to his door, every night, several times a night, like I was marching to my death. My feet were dragging, my head hung down, my eyes were only half open, I bumped into walls. It was ugly. And the later it got, the longer the death march felt.

About three months after my youngest was born, I finally hit a wall. I’d had so little sleep that I was convinced the distance to his room had reached infinity. I was never going to get there. If I had to walk down that hallway one more time, I wasn’t going to make it. So I let him sleep next to me. It wasn’t so much a choice as it was survival.

It’s not that I have a problem with co-sleeping, if it’s done correctly. But I’m pretty sure putting him in the middle of our bed with a down comforter pulled halfway up his body, between my husband, the dog, and myself, wasn’t the safest sleeping environment. Even as I passed out from sleep-deprived delirium, I could feel my younger self judging me. Of course, I told her where she could stick it and fell asleep. No harm done.

I believed that a parent should never yell at their children.

Discipline was to be done calmly, with a firm voice, but never shouted. Hey, I watched Supernanny. I was going to come down to their level, issue a firm warning, and then they would miraculously respond with respect and maturity. Fool proof plan, right?

There’s that word again: plan. I do try not to raise my voice to my kids whenever possible. When I am focusing only on them, I do exactly what Supernanny suggests. I warn the three-year-old first. Then if he doesn’t listen, I send him to time out with a firm, stern voice. That works, most of the time. However, sometimes I’m not focusing solely on my Zen parenting skills. Sometimes I’m cooking dinner, writing, talking to another adult, cleaning up the pee on the floor in the bathroom, trying to take a shower.

I wish I had the patience to stop whatever I was doing and connect with my children with love and respect every time they misbehaved. I wish. But in reality, there are times when I just have to shout. There are times when I have to threaten everyone in the house, including the dogs. “The next person who speaks above a whisper is going outside. In the snow.” So far, only the dogs have called my bluff.

So my conclusion is that my younger self was on the right track. She meant well. She was an idealist. Unfortunately, what I now know is that parenting doesn’t sit comfortably with ideals. Even the best mothers have moments of weakness. We all have our opinions and our beliefs. Some of us even live by them when it’s convenient. But mostly, we are just getting by. We cut corners, and dodge melt downs, order take away for the third night this week, and lock the bathroom door sometimes just because we need a break.

Our children aren’t perfect and neither are we, but we love them. And that is perfect, and absolute, and undeniable. 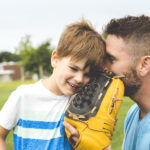 A Father and Son in a Sacred Space 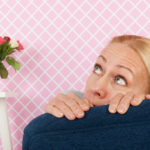 A Mother’s Guide to Acclimating to Summer