I spend a lot of time worrying that I’m a bad mother.Do I feed my kids healthy meals?Do I give them enough one-on-one attention.What will they be telling their therapists about me in twenty years?The internet is a wonderful tool for feeding these insecurities.  When my youngest son was six weeks old, he got a minor sunburn on his face.  I felt terrible and decided to Google what I could do to make him feel better.  I was immediately inundated with articles and message boards chastising me for ever having my newborn in the sun and accusing me of child abuse.  Within fifteen minutes, I was convinced my baby was going to die in my arms and called his pediatrician in a tearful panic.  It was after hours on a Sunday and he was not impressed.Of course, my son was fine and I learned never to Google my mistakes again.After expending so much of my emotional energy convincing myself that Child Protective Services wouldn’t care that my baby was eating dog food while the three year old was standing naked on the back deck peeing into the wind, I sometimes forget that I have other responsibilities in life: I am more than just a mother.  I am also somebody’s wife.Since having children, my poor husband often gets pushed to the bottom of the priority list.  If it’s between the kids, me, or him going hungry because I had to leave the grocery store when my three year old refused to get out of the freezer and the popsicles were melting, he’s going to have to call Dominos.  It may not be fair, but it is the natural order of things.That having been said, it’s nice sometimes to take the time to think about my loyal, loving husband and his needs.  So, just for today, I’m going to spend a few minutes feeling guilty about what a terrible wife I am instead of my questionable mothering skills.  You know, for a change of pace.Ten Reasons I’m A Terrible Wife1.  My libido definitely leaves something to be desired these days.  Clearly my husband didn’t squeeze two hefty children from his loins and then let them use his body as their own personal playground for the next four years, but I did.  Needless to say, sex is usually the farthest thing from my mind.  When I run out of creative ways to say “no,” I will sometimes invite my dogs into the bed to act as a furry sex-barrier.2.  When the furry barrier fails I’m often too lazy to kick the dogs out of the bed before we do it.  Then I laugh when the dog sniffs my husband’s butt half way through.  3.  My most expensive lingerie are nursing bras and the closest thing I have to a thong are my pre-baby underwear which are too small and bunch unflatteringly between my cheeks.  Most days I wear whatever I can locate while groping in the dark before the baby flips out of his crib and onto the floor.  Last week, I wore a pair of bikini bottoms for several hours before realizing it.  I only noticed because I was getting a bit worried when my pee smelled like chlorine.4.  I sometimes watch Grey’s Anatomy or The Vampire Diaries on nights when I know my husband is going to want some “private time.”  So far I’ve refrained from yelling out Ian Somerhalder’s name in bed, but it’s only a matter of time.5.  I have no idea how to make a Tom Collins or a Manhattan, I used to think a dirty martini was some kind of body shot, and I frequently find myself wondering what is so neat about Scotch?6.  When my tired husband arrives home from a long day of work, I should give him a quick kiss and hand him a stiff drink.  Hey, I watch Mad Men.  Instead, I usually toss him a fussing, snot-covered, baby and deliver the news that he needs his diaper changed before he has a chance to take off his suit jacket.  A good wife would let him change out of his work ensemble before handling the children.  A mediocre wife would take his dirty suits to the dry cleaner the next day.  I usually pretend I didn’t see the unidentifiable white stains down his back and trust his colleagues will be too polite to point them out.7.  There are times during the winter when my legs are hairier than my husband’s.  Ok, Spring, Summer and Fall too. I’ve actually gone through several razors during one shower trying to clear-cut the forest that has sprouted on my lower half.  Don’t even get me started on the mess that is my bikini area.  Speaking of furry sex-barrier.8.  I used to perform all sorts of romantic gestures for the man I loved:  I left sweet notes in his lunch, sent messages with song lyrics expressing my endless love, cooked his favorite meals when I knew he’d had a hard day, and waited on him hand and foot when he was sick.  Then we got married and had children.  The last time I surprised my husband, it was with news of our second child.9.  The closest my husband ever gets to kinky sex is when one of us throws out our back flopping into missionary position, and the last time I asked him to fondle my boobs was during a breast exam.  We’re 50 Shades of Boring.

10.  Before we had kids, when my husband snored in the night I would gently wake him by stroking his back or kissing his cheek before asking him sweetly if he could turn over so I could go back to sleep.  Now, if a swift jab to the ribs doesn’t rouse him, I just flip him straight out of the bed.  Mommy needs her sleep.

Basically, I am the opposite of an old fashioned housewife.  I used to think it would be wholesome and pleasant to be a mom in the 1950s: baking cookies in a frilly apron, wearing my hair in curlers, sipping tea, gossiping with the neighbors, and sitting on the front porch in the evenings.  Turns out, I would have made a terrible June Cleaver.  My first day on the job I would have burned the roast, put too much vermouth in the Manhattan (is there vermouth in a Manhattan?), and brutally rebuffed Mr. Cleaver’s attempts to push our twin beds together.  I would have been out on my ass faster than I could say “furry sex barrier.”  Sorry, honey.

Can The Beaver come out to play?  Apparently not.

In what ways are you a terrible wife?  Or is it just me? 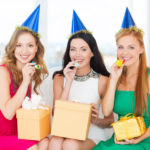 Can We Stop With the Goody-bags and Thank-you Cards?