It’s that time of year when the Christmas Police and the Thanksgiving Purists have a pissing contest with the rest of the world. Don’t pretend you don’t know them. They’re not opposing gangs in a Kirk Cameron film about how the liberal media grinds up Christmas trees to make Satanic Bibles. No, they are far more irritating than Kirk. You probably know a few Christmas Police or Thanksgiving Purists. They may be your friends or family. You might even be such a person. Hell, you could even fit into both groups.

Despite these scary folks, and the fact that I need to bundle up in 19 layers of wool just to get the mail (and that’s just email), I still love this time of year. I hate the weather with a white hot sparkly passion, though. As a native Floridian who is trapped in the Midwest, I shiver from October through May. Still, even with the ice, snow, and endless clouds, I still love the holidays.

The fact that I refer to them as “the holidays” might irritate some people, and those people are Christmas Police. They believe that current liberal politics and evil atheists are responsible for “Happy Holidays.” Really, Bing Crosby is more responsible for this all inclusive greeting than President Obama. Christmas Police say things like, “This is MURICA! We can’t say Happy Holidays because we are a Christian country!” They think they are defending Christmas, or keeping it pure, or some other such bullshit. In reality, they are simply showing that they don’t know how to read a calendar.

Most of us understand that Christmas is not the only holiday within the four-week period from Thanksgiving to New Year’s Day. There’s also Kwanzaa, Hanukkah, and Saturnalia. Those are just the holidays that are typically celebrated in the U.S. So, saying, “Happy Holidays” is not about excluding Christians, it’s about including everyone. Also, for me, it’s about talking less. As a work from home introvert, I’d rather just cover everything with two words than list all of the holidays with their appropriate happy or merry. I’m pretty sure Santa, Jesus, and Saturn would approve of simply being nice to everyone.

Some Christmas Police are also Thanksgiving Purists. You know, the people who get their panties in a bunch when Christmas items are displayed before the appropriate day. They might as well say, “Thou mustn’t put up thine Christmas tree before Thanksgiving.” Some Thanksgiving Purists get quite enraged about seeing Christmas decorations before turkey day. They post about this major crime on social media sites, some people blog about it, and others talk about it on TV. Some of them actually tell others when they are allowed to put up Christmas trees, lights, and other holiday decorations. It’s like they have some sort of Asshole’s Guide to the Holidays book, along with a color-coded calendar that they refer to. I would like to send people who are upset by seeing Christmas decorations in November on an all expense paid trip to a cave in the Middle East. This way they can get away from the offensive early Christmas decorations and learn about real problems.

Let me hear from you in the comment section. Are you a Christmas Police or a Thanksgiving Purist, or are you just someone who enjoys pretty lights and a decorated indoor tree when it’s cold and gray outside?

Lisa Petty is a former stand-up comedian who decided she would rather just write funny stuff after years of dealing with drunk people. When she is not cracking inappropriate jokes, Lisa is an online English professor. You can read more of her snarkasm on Petty Thoughts.  If you like humor and cat pictures, you can follow Lisa on Facebook, Twitter and Pinterest. 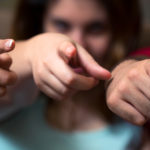 Lay Down The Swords 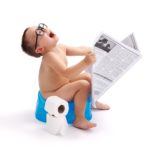 This Wasn’t In the Potty Training Manual