We have a ton of different nicknames for underwear: panties, undies, drawers, knickers, skivvies, unmentionables… I’m sure there are more.  No matter what we call it, underwear serves a purpose, right?  But is that purpose more than just to cover our butts?  From the time I stopped wearing little girl cotton briefs with flowers or days of the week slogans until just recently, my underwear functioned as a form of self-expression instead of being just… well, functional.

I could wear severe and boring business clothes but my underwear could be sending an entirely different message, even if that message was only sent to me. My outer clothes might be saying “I’m a no-nonsense professional” or “I’m a badass” but my underthings might be saying something else:  sweet and sexy, sporty and sassy or “take me now, I want some hommana hommana meow meow.”

When I was single, I chose underwear for the cute factor. Even if there was zero chance of anyone else seeing them, my underwear was an extension of my fashion choices and I wanted it to look nice.  Polka dots.  Lace.  Matchy-matchy bra and panty sets.  I felt a little prettier and a little more put together if I had on cute drawers.  No one but me knew I was sporting pink panties with purple lace, but that somehow impacted the way I carried myself and took on the world.  Maybe that sounds silly, but it was true for me.  Then.

When the hubs and I were newly dating and the prospect of getting some hommana hommana meow meow seemed ever-present, undies were chosen with care. Hell, even when nooky wasn’t on the immediate horizon, I still wanted to look cute if he happened to see me in the middle of getting dressed or undressed, right?

As we settled in to married life, parenthood and all of the stressors and time suckers that go with that, I put less thought in to my everyday skivvies. I remembered to put clean ones on and all that, but as I got older, “hey these look like they’d be comfortable” became more of an underwear-choosing criteria than “hey, I bet these would really get the party started in the ole bedroom.”

Special-occasion underwear got wedged further and further into the recesses of my panty drawer. I’d push the lacy thongs with the little bows aside and think “ain’t nobody got time for that” while digging for something to wear under my yoga pants.  I’d accidentally grab the cute little cheeky shorts that rode up so annoyingly that I never wore them outside the bedroom and sigh “maybe later.”

As married life evolved, sex became something that happened when we had time or when we found ourselves with the odd night that we didn’t have a little kid wedged between us in bed. Still good, still fun, but with more of a “take it as you can get it” mentality and less thought behind setting the stage with fancy bits of mesh and lace.

As much as I hate it, fight it, and try to pretend it isn’t happening, my body is aging. Changing.  Shifting and yes, drooping.  Despite relatively clean eating and reasonable exercise and despite the fact that my jeans still fit the same, my underwear does not.  My mid-menopausal lower belly is a little squishier and a lot less tight… and it was probably really never what I’d call tight in the first place.  Big sigh.

Nothing is worse than uncomfortable underwear, people. I’ve noticed a lot more bunching, pulling and just things not feeling right in my lingerie department.  I bought myself a few new things, hoping that maybe a new brand or a new size would give me the right level of comfort and coverage and still allow me to keep a little bit of the cute factor that I still thought was important.

Then I succumbed. I felt a little defeated when I tossed the package with the word “briefs” on it in to my cart.  I hurriedly arranged an assortment of other stuff I bought on top of my new undies so other shoppers wouldn’t see my boring, granny underwear and judge me.  Dumb, right?

Even though it has truly been a journey of sickness and health and my husband has seen all kinds of unsexy stuff happen, the thought of him seeing me prance around in my new granny panties was depressing.

These thoughts were totally eclipsed when I put my new skivvies on. I swear I heard angels sing.  Maybe it was letting go and giving in to comfort over fashion.  Maybe I really had found the perfect fit for my squishy but still beautiful and functional body.

Having more comfortable underwear has put my head into a more comfortable space about my changing body… weird as that may sound. My dignity has survived.  I don’t cringe when I see these larger panties in the laundry basket and I don’t cringe at the thought of my husband seeing me prance around in them.  And you know, he doesn’t cringe, either.  Because surprise – he didn’t marry me for my stellar taste in panties.  He married me for who I am.  We’re okay in the hommana hommana meow meow department and whatever unmentionables I pick aren’t a something he worries about… especially when they’re crumpled on the floor beside the bed. 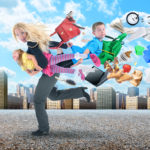 Is Being Busy a Badge of Honor? 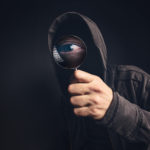 My Stalker Still Burns My Ass