This post is a BluntMoms Rewind selection for 2014. Our writers love this post so much they want to share this with our readers again. Enjoy the awesomeness:

Every morning is a scavenger hunt that starts by referring to the scribbled list of items in my head. First, I find my children, who are often still in bed or sometimes already in the family room watching TV. Then, I scrounge around for food and locate tooth brushes and underwear.

About half the time, I win at this game. Often “comb hair” is left unchecked, and once in a while “brush teeth” is simply forgotten all together.  But “get dressed” always gets checked off, or at least it did until recently.

Technically, my three-year-old, was already dressed. She was wearing a full-length pink, princess gown with a hoop skirt, earrings and a tiara. But the dress code at the daycare doesn’t allow courtier level formal attire, except on Halloween. So I told Marlo to find something else to wear.

“Why don’t you get your Hello Kitty dress?” I said.

“I’m wearing this. It’s beautiful,” she said, emphasizing the “eu.”

This was my cue to go upstairs to her bedroom and get the Hello Kitty dress. The scavenger hunt is a timed event, so I didn’t have 20 minutes to argue.

Hoping that she was suffering from toddler amnesia, I re-appeared in the family room and pretended like I had just found her favorite outfit and wasn’t this all a wonderful surprise.

“You can wear this,” I said, making my best cheerleader face and holding up the dress on its hanger. “Look, it sparkles.”

I wasn’t exaggerating. The front of the dress was covered with sequins.

“No,” she said, blankly, without even looking away from the TV.

I picked up the remote and wagged it at her. “If you don’t get dressed, I’m turning off the TV.”

I punched the power button with my thumb, and then scratched “turn off TV” from the list. She didn’t protest.

I picked her up and put her on my lap. She went limp, like a peace activist at a sit-in. So, I lay her across my legs and start pulling the princess gown off. Suddenly, she went rigid and started screaming. I tried to disengage the dress from her arms. She latched onto the sleeves with the intensity of someone hanging by one hand from a bridge and pulled them back on. The dress was still on her shoulders. I tried holding her arm tightly and shoving it through the sleeve. She held tight to the ruffled elastic. To get the dress off of her, I was going to have to pin her to the sofa using some wrestling moves that I had been subjected to in junior high by my best friend’s brother.

I was getting hot and not just because I’m out of shape. This was starting to piss me off. I could feel my muscles tensing and the adrenaline start flowing. This was becoming more than a power struggle. My body was prepared to issue a declaration of war. My mind, on the other hand, was still trying to be Madeleine Albright. I could grab her and rip off the princess dress, but what would that achieve? Probably a visit to a therapist’s office when she was 17.

I stopped and dropped her back down on the sofa. She immediately began sucking her thumb and refused to look at me.

“Your sister and I are leaving in 10 minutes. And if you’re not in the car, we’re going to school without you.”

“I am going to leave without you,” I told her, getting right in her face, my words sending puffs of air right into her nose. “And if you are not with us, you are going to spend the day in your room by yourself. Do you hear me?”

I was yelling now, so of course she could hear me.

“Ok,” she said, popping her thumb out of her mouth to say those two letters and then putting it back in.

I could feel a tickle in the back of my throat. The kind that you get when you scratch a kitten behind the ears. I loved this baby. And I hated her.

“Is everything OK in here?” asked Pam, my spouse.

“Yes, but you’re going to have to wait to go to work, while I drop off Wynn. Marlo is going to her room.”

I packed her sister in the car and drove away. When we arrived at the day care, I explained to the teachers that Marlo might come to school later if she decided to get dressed, however given her deep commitment to the princess costume,  it didn’t seem likely. The teacher smiled, half-amused, with a closed mouth and the skin crinkling gently around her eyes. They knew Marlo, too.

When I got back home, Marlo was in her room waiting for me. Calmer now, I addressed the stubborn princess in my best diplomatic but stern voice.

“You have to stay in your room and I will come and check on you in an hour. And if you decide to get dressed, you can go to school.”

“Ok,” she said. She was lying in her bed with her thumb in her mouth, covered with her blanky. She was my baby: My very strong-willed, articulate baby. I wanted to lie down and put my nose in her hair to see if it smelled like boiled peas and stroke her back which I could still cover with just one hand. But I also wanted her to follow directions. So, I blocked the door preventing her from sneaking into the family room to watch more TV and went downstairs to my office.

I sat down at my desk. The morning quiet engulfed me. The day was really just starting, and the hostilities had passed, it seemed. I could hear the dull slapping noise of my tears landing on my keyboard tray. Plop. Plop, plop. I snatched a tissue from the box on my desk. The tears were rushing now. Rage had boiled up inside of me and was spilling out my eyes. I had just come so close to lashing out with the physical force of an adult against my baby. I had screamed and stormed. I wanted to slap her. I wanted to crush her small arms and force them through the sleeves of her dress. I could feel it in my hands. I could sense it in my fists. I didn’t do it. But I wanted to, so much.

How did this come so easily, so naturally to me? This same question haunted me every time my anger swelled like a soap bubble and then suddenly popped when I reached to touch it. It was there and then it was gone, and all that remained was a painful residue of shame. Where is this from? How did this happen? How did I become the raging parent with the hands like loaded guns?

I had never asked myself these questions before, being too embarrassed to even explore the contents of my own mind.

Instead, I would justify: My daughter needed to learn that the rules could not be broken.

I would minimize: I needed to get my point across, so I yelled. Everyone yells at their kids.

I would just plain deny: I did not do that. I did not. Or if I did, it wasn’t that bad.

But now, I recognized these for that they were: The tools of abuse. And I had received them as hand-me-downs.

I crept up the stairs. Before I reached the landing I could hear Marlo talking to herself in a high, sweet voice, as though she was chatting with a good friend. I removed the bungee cord from the doorknob and let it fall against the banister. Then, I knocked and pushed the door open with one knuckle. She looked up and smiled.

“Are you ready to go to school,” I asked.

“I picked out these clothes,” she said sweeping her hand over a long-sleeved shirt and a pair of sweat pants, like Vanna White. And then she stood up.

I studied her. Her bare, plump legs were pinched off at the top by a pair of pink bikini bottoms. Mostly covering the bath suit was a green, fleece shirt decorated with a panda bear wearing large slippers.

“This outfit is perfect,” I said. “Let’s just put on some pants and we can go.”

I kissed her head. 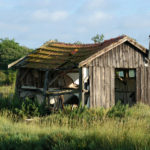 Is Your Vagina a Fixer Upper? 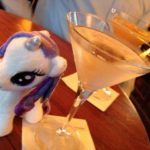 Seven Ways I am the Worst Mother in the World