I admit it. Sometimes I’m a creep.

Not on purpose or anything. But sometimes I find myself in these situations where I’m uber-creepy. And pointing it out or making a joke of it would only make it worse.

There were only two of us in line at Starbucks, both mamas with sons. She was ahead of me, and together we waited an eternity for the barista to ramble up to the counter. My mouth was already watering for some foamy goodness.

In my head I was preparing, “Tall soy chai. And a pink cake pop. Please.”

And then it happened. The other mama spoke the words in my head. She even ordered the same exact snack for her little boy.

Before I could say “I’m-not-trying-to-eavesdrop” the mystery woman handed her kid the over-priced two-bite treat and declared, “Here you go, [NAME].”

Only it wasn’t just some name. It was MY son’s name. Yeah, the one standing next to me. The one who I was about to order an identical pink cake pop for.

I had to quickly decide: Do I change up my order so that I look less creepy?

Nope. No way. I was salivating for a tall soy chai, there was no going back. And kiddo would never be satisfied with a chocolate or cookie dough variation. Really, that part was non-negotiable.

I also realized it would be impossible to speak at a volume loud enough for the barista to hear me but quiet enough so my doppelganger wouldn’t. No choice. I was going to be the creepy one.

So, uncomfortably, I placed my order. The same order I place quite often (really, I swear!), though now with every appearance of a copycat.

I wanted to explain myself to the mystery lady. “Really, I was going to order that anyway! You, my dear, are actually the one mimicking me… only you did it first.”

Yeah, no. That wouldn’t help at all.

So the barista took my money and handed over the cake pop. Before I could stop myself,  I echoed my line-buddy’s phrasing word-for-word: “Here you go, [NAME].”

I saw her flinch a little, and both the woman and boy looked up at us, before turning away and avoiding eye contact.

I wanted to engage them. Say something like, “Strange coincidence, huh?”

Or, “That doesn’t happen every day, does it?”

Nope. Creepy, all around.

I searched my mind but couldn’t come up with one thing to say or a way to acknowledge the situation that wouldn’t make it even more uncomfortable than it already was.

So I took my foamy goodness and my 9-year-old, with his unoriginal name and rose-colored confection on a stick, and we went on our creepy way.

Jacqueline Miller is the lone female in a house full of guys. She travels freakishly light and can balance two kids on her Dutch bicycle. Her recent articles appear in Scary Mommy, Her View From Home and Sammiches & Psych Meds, and she’s working on a book about her three years in the Netherlands. If you enjoyed this, you can follow her at www.boogersabroad.com and https://www.facebook.com/boogersabroad. 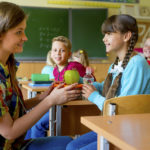 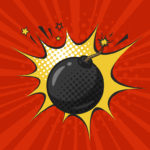