Our four-year-old has cavity issues in his baby teeth. At his last check up, he had FIVE cavities.

Nothing the dentist says after that is good. She tries to make out like it’s normal for some kids, blah, blah blah. She asks if my husband or I am brushing his teeth. What? No, we let him use bleach to whiten his smoke-stained fingers, and when I ask him for scissors I say “run back with them.”

Of course we brush his effing teeth.

Stupid hippie. Stop reading everything on the internet. Small amounts of any poison take forever to kill off people.

Next damnation statement: “Do you use fluoride toothpaste?”

Fuck no, I heard it’s poison. “No, I spend six dollars a tube on sodium laurel sulphate- and fluoride-free paste,” I preach.

Silly shake of dental head. She said: “A pea size of fluoride won’t harm anyone.”

What I heard: “Stupid hippie. Stop reading everything on the internet. Small amounts of any poison take forever to kill off people.“

Fine. I agree to fluoride.

When she says I need to schedule him for five fillings, my cheque book flies out of my purse and commits suicide.

“Seriously? He is four. Won’t those very teeth be gone in like two years?”

Since my son was better mannered than me, he was allowed to go the “Treasure Chest.” I felt happy that at least we would recover some of the cost back with a toy. The vision of gold light shining from the box was replaced with smoke and dust as my son and I both looked at the shitty collection of prizes.

Small, plastic parts were strewn everywhere. Ugly unidentifiable animals, cardboard puzzles as small as your thumb, yo-yos that didn’t even have the string wrapped around them. Kinder Egg prizes–before they improved–were a suitcase full of drug money compared to this dentist treasure trove of disdain.

When she says I need to schedule him for five fillings, my cheque book flies out of my purse and commits suicide.

Are you fucking kidding me? You make what–millions of dollars a year, and you can’t even fill a box with at least dollar store prizes? You slay my bank account and shame me for not using toxic fluoride, and my kid can’t even find a prize worthy enough to give to a prisoner in isolation?

I offered no useful answers as he held piece after piece up asking what does it do? Finally after pleading with him to pick something. He takes this. A tiny red stick is missing since after we got the prize, but it fits in any one of the five holes on the green base so you can play ring toss. 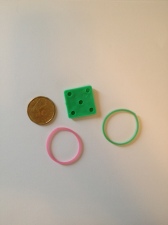 .
You know what this prize is, dentist? This is a car accident. ‘Cause guess what–my son won’t wait until  we get home to open it. NO.

He will open it, beg the fuck out of me to put it together NOW, and it won’t fit. The stick you can’t see didn’t fit. I had to take a fucking hammer to it, and even then it fell over.

He will yell at me from the back seat that he lost one of the circles (cause he did) and I will, after feeling like a tooth-neglecting mother, start sweating, boiling with rage at you, and I will drive my car into a ditch.

So either throw out your piece-of-shit dentist treasures in that treasure chest, or start handing out samples of fluoride toothpaste. It may be poison, but I can guarantee it’s less harmful to our health than playing ring toss with this. 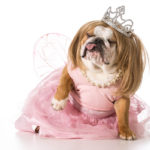 Reality is no Fairy Tale, Princess 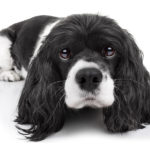 My Mama Told Me – You Better Shop Around 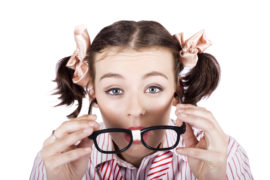