“Everyone loves babies,” said the reporter on the Today Show. I snorted, almost choked on my coffee, and thought: not me. That’s a big assumption. I’m sure most people say they love babies, and dogs, and surprise visits from neighbors, but I know I’m not the only porcupine in the world to disagree.

Years ago, when I was young and believed in silly things like palm readers and my never-ending ability to metabolize carbs, two different “psychics” read my palm. At that time, I was 20 or so, I wan’t them to tell me how many children I would have. Both, at different places and times told me that I would have a boy, followed by fraternal twin girls.

All through my twenties, I remembered this and expected it to happen. I had the boy when I was 26, and he is now 17. The twins are still no shows. And while I did try to have another baby for a while, I really hope the twins continue to stay in the land of fairies and predictions. At this point in my life, I would rather birth a litter of kittens than start mommyhood all over again. Seriously, even if they had their claws out through the whole birthing process, I would rather mother a litter of kittens, than raise another human, and here is why:

1. Cats are WAY easier to potty train than kids. You just put a kitten in a litter box, take it’s paw and drag it through the litter, and the kitten just gets it. My son was still in pull-ups at 3 1/2. He was so stubborn about holding his poop rather than using the potty that I had to give him chocolate laxative. For real. There were also a couple of times where I had to pull a ball of crap from his ass. Nope, I will take litter box duty any day.

2. Cats earn their keep by keeping pests away. When I lived in Florida, I found dead lizards in my house. Thanks, kitty. I’m pretty sure there is a law preventing people from using children as pest control. “Bite the mouse, Timmy.” “Get the bad roach out of the house!” Your kid would be in foster care for stuff like that.

3. Cats show great appreciation for cheap toys. There’s no play with it for five minutes and then throw a fit in cat world. While they do appreciate a good catnip toy, you really don’t actually have to buy cats any toys. They enjoy paper bags and boxes more than toys, actually.

4. Cats sleep like 23.7 hours a day. While my son did sleep all night early since seven weeks old, he was up with the farmers until he was 11 or so. On Christmas morning, he was up at 4. I said 4 in the fricking morning!! Even the cats were still sleeping.

5. Cat food is cheaper than formula, and less painful to serve than breastfeeding. Kittens are weaned within a few weeks. Then, they eat regular food. And they eat it by themselves. No playing airplane and cleaning their faces and everything around them.

6. You can make art out of cat fur. You’d probably be arrested, or at least kicked out of the PTA if you made sculptures from kid hair. Plus, can you imagine what your kid would look like after you removed clumps of hair for your art?

7. Cats don’t go to college. That’s right. You can spend all of the money you would need to put away for college. It’s not happening.

8. Cats will love you when they are teens. Cats never stop snuggling with you. And it is less weird and Norma Bates-like to snuggle with a teen cat than with a scowly teen son.

Currently, I’m three-cat crazy. I also have two dogs, but that is fodder for another tale. I know that I can never actually birth a litter of kittens. I’m not that loony. But, I will definitely adopt more cats through the years. I’m good with just the one child though. Maybe the twins will come in the form of grandchildren. 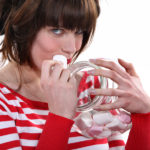 12 Things Mothers Do When Nobody’s Looking 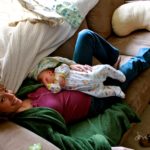 Getting that new mom feeling {the third time aroun