Walking to the end of the driveway, to get the Sunday Post, I would read “Hands Across America Cancelled” and just above it, a headline that warned of an illness sent by the Russians. Catching my neighbor Karen outside in her bathrobe, she’d frantically be typing into her pager letting her gardener know that she didn’t need her roses tended to for a while.

So my husband could announce the news I had already learned, I would place the paper right in front of his eye, along with his coffee just the way he liked it, while I went to reheat my cup of Folger’s in the microwave for the third time that morning.

Sitting at the kitchen table the kids would be eating their Smurf Berry Crunch while my husband mansplained what felt like an afternoon special.  They would come up for a breath of air, from chugging Yoo-Hoos to reply, “no duh.”

My neon triangle print tracksuit would be getting its miles in, while my button-down blazers with giant shoulder pads would collect dust in the back of the closet as obviously I’d be the one staying home from work with the three kids.

I no longer had time for the simple things like hair spraying my bangs. Instead, I’d be pulling my hair out listening to my kids yell, “don’t have a cow mom.” Busy homeschooling about the planet Pluto, I’d try to understand the physics of how my 6-year-old carried a backpack filled with 30 pounds of textbooks. Meanwhile, my children would be snorting the scratch and sniff stickers stuck to their trapper keepers.

Playing a game of telephone, my husband would come ask me to ask our daughter, “to get Becky off the line.” Hanging up her swatch phone, she’d stare at her poster of River Phoenix wondering when her Aunt flow would arrive while listening to Casey Kasem’s top 40 countdown, ready to hit record for her mixtape hoping “Cruel Summer” would come on.

When I finally got the chance to use the phone, I’d be making chicken pot pies with the phone cord wrapped around my finger. “Tell Pat to send the kids over,” I’d say to my neighbor’s husband Leslie. “We’re going to make it a Blockbuster night.”

We would all pile into my station wagon. The younger kids would ride in the backseat, double buckled, with the one seat belt that worked, while the older kids got to ride in the ‘way back’ unbuckled, while waving to distract the drivers behind us.

On our way to rent a VHS, I would keep the kids quiet with candy cigarettes that they pretended to smoke while I played the single song on my cassette tape, “Red Red Wine.”

My daughter would rub her rabbit’s foot keychain, hoping ‘Flight of the Navigators’ hadn’t already been checked out. We knew it wasn’t the end of the world when the actual video was in the display case. Holding a can of soda in one hand and “Better off Dead in the other, I’d overhear a concerned customer behind us dressed in a blazer with a turtleneck underneath, asking his friend, “how’m I supposed to get my coke?”  Leaving the store with the video that would keep us busy for 72 minutes, the 15-year-old clerk would remind us to “be kind, rewind.”

Instead of spending more time together around the dinner table, listening to my kids yell, “gag me with a spoon,” I would take them to McDonald’s, to order myself a hamburger wrapped in styrofoam.  We’d spend the evening circling around the drive-thru, ordering each child their happy meal one at a time, hoping we could collect more than just the smiling police officer McNugget Buddy.
Back at home, my husband would still be hiding in the bathroom, with Sally Fields on the front of a playboy magazine he thought no one noticed, tucked behind the toilet.  When we would finally be sitting all together as a family, we’d watch the Cosby Show wondering what Bill would do if he was stuck in a small space with his familia.

Jessica Keith is a professional lecturer at San Diego State University and as the mother of three littles (ages 2, 5, and 8). When she is not raising her own tiny humans, she is getting paid to guide other people’s children in the classroom teaching Cultural Adaptation. 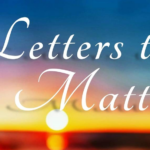 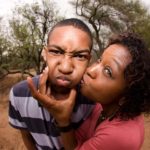 The Tricks I’m Learning From My Middle Schooler