One of my favorite indulgences before I became a mother was to unwind from a long day with a hot soak and a glass of wine.  Nothing was more effective to shed stress than a hot tub of bubbles, a few scented candles and a big goblet of Cabernet. I would spend an hour or more lounging, sipping and reading until my skin pruned and the water cooled. It was luxurious and often exactly what my spirit demanded at the end of a difficult day. I would emerge, pink-skinned and renewed.

When I became a Mom that decadent practice became one of the first causalities of my new life. Bathroom alone time became a precious commodity that could not be squandered.  Long baths were relegated to abbreviated showers.  It was a minor miracle if I managed to make it through the whole shampoo and condition cycle before my daughter interrupted, pressing her face or fists against the shower glass demanding snacks.

Then, one night last week, I found myself with the rare opportunity indulge in the old habit.  My daughter had fallen asleep an hour before her usual bedtime.  I suddenly realized that with my daughter sleeping and my husband not due back from work for some time, I had been gifted with two full hours of “me time”. I backed cautiously out of my daughter’s room, crated the dog and bolted for the bathroom.

I rummaged in the back of the linen closet and let out an actual, honest-to-God victory yelp when my fingers found the bag of birthday cake bath bombs my sister-in-law had given me years ago. Grinning wildly, I dropped one into the churning water.  I retrieved my book, brushing a thin veil of dust from the jacket cover and left it on the rim of the tub. I padded downstairs where I knew I had a bottle of wine in reserve.  I opened the bottle, overly conscious of how loud the electric wine opener sounded in the quiet house.

I returned upstairs and double checked that my daughter was still fast asleep. I marveled at how delicate her features looked in repose.  Her long lashes stood soot dark against pink cheeks and her honey colored hair spilled out across the pillow.  I gazed at her and said a prayer that God would always protect her and give her an interrupted, dreamless sleep…at least for the next forty-five minutes. I silenced the whimpering dog with an icy stare and wagged a warning finger at him then I tossed in a chewy bone for extra insurance.

The bathroom was full of luxurious, fragrant steam. The water was just hot enough to turn my skin pink.  The surface of the water was opaque and shiny, a veil of vapor rising from it. It looked like a moon pool, mysterious and inviting.  I took a deep drink of wine and set my goblet down alongside the tub. I dimmed the lights.  I lowered myself slowing into the aromatic suds, anticipating an epic hour of soaking and sipping my way into a delightful buzz.

In the harshest turn of events, my rump was immediately impaled by something that I can only describe as unnecessarily sharp and inflexible, possessing a near impossible number of angles and spikes. I fought to keep down the scream and scrambled in the slick tub to free the offensive object. I wrapped my fingers around something hard and plastic and tugged.  I was mortified to discover that I had been defiled by Disney, a figurine of Heihei, Moana’s charming but vacuous chicken pet, to be more precise.  Nothing says “Welcome to motherhood” quite like having to unexpectedly extract a child’s toy from your nether regions when you anticipated a carefree soak in the bath.

Miraculously my daughter had slept through all the frantic splashing and barrage of curses. I chucked Heihei into the darkest corner of her room, satisfied to watch him slide beneath the radiator never to be seen again.  I drained my wine and the tub, watching the remnants of my evening slip away, leaving behind a glittery trail of broken promises. I wrapped myself in my tattered bathrobe and climbed into bed, nursing my tender tail and damning Disney and that sweet, stupid chicken to hell.

About the author: MD Maurice, (not her real name), has elected to publish anonymously, I mean can you blame her?

You CAN Have It All (but it’s really damn hard) 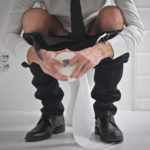