There’s nothing to remind you how wonderful a home is when you no longer have one. Social media is awash with people whining about daily minutia like too much snow, not enough snow, shoveling, laundry, whether a groundhog got it right or wrong.

“Have a heart,” I imagine some of your are thinking. Hell no, I am living in a soulless edifice that is eerily similar to the institution in One Flew Over the Cuckoo’s Nest. The ancient metal open topped ashtrays by the elevators are filled with barf inducing mountains of half smoked cigarettes.

A little scene setting: Four people, one bathroom, three of us have been inhaling prunes like hippies around a bong.

You’ve put two and two together now and figured out my digs are not the plush luxury of a fancy hotel, and there are no valets dressed up as organ grinding monkeys. But I will give the employees credit: they have been stellar at responding to my incessant requests and complaints, one of which was the urgent need for a plunger.

A little scene setting: Four people, one bathroom, three of us have been inhaling prunes like hippies around a bong.

I noticed a floater and some lingering toilet paper, which suggested a problem with the flush. After a few attempts, the bowl filled precariously high. Given that we are all bunged up tight, I worry what a real deposit of digested chocolate eggs would do to this toilet bowl. I call the maintenance guy who comes once with a screwdriver when I’d suggested a plunger. Drill?!

Off he goes again, and I am starting to cramp up like the wedding gown scene in Bridesmaids. I am doing the sphincter clench dance when he finally comes back, plunger in hand. There is relief in the knowledge that I’ll soon be free. He leaves, I’ve got my buttons discreetly undone. The door clicks shut, knickers are around my ankles and I do a quick flush to test. Sweet Jeysus, it was still filling high. Too late for any dignity now.

I am starting to cramp up like the wedding gown scene in Bridesmaids. I am doing the sphincter clench dance when he finally comes back, plunger in hand.

I hate embarrassing moments. I had dutifully held it in the first time only to come clean and bare my bowels for round two. A silver lining emerged: my eldest also needed to poop.  Excellent, I could blame the poo on her. I invited her on onto the throne and called reception back, whispering that my daughter has unfortunately just blocked the toilet which had not been fixed properly.

The guy came back; house cleaning arrived too. They all got to view our family dump together. I was officially mortified despite my finger pointing and am positive everyone is looking at me as the chick who had a bowl chockablock full of poo and blamed it on her kids. I need a house, preferably with two to three bathrooms, each equipped with it’s own plunger, STAT. The maintenance guy? Well I am pretty sure he will never do a half-assed job plunging again. 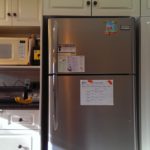 The 5 Best Features of the Frigidaire Gallery Custom-Flex™ 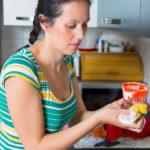