If you are a person of faith reading this, please remember that not everybody believes in what you do, however, most of us Atheists would stand up for your right to believe it.

Now that I have made myself clear, I am here to talk about some struggles Atheists contend with.  There are many issues we face in addition to the constant judgement, derision and clanging religious insistence. Parenting is quite different when you try to balance predominantly Christian societal norms with your own beliefs. We attempt to parent our children in a way that supports a wide perspective of other ways of living in society as well as the way in which our family does. It takes transparent communication without judgement of the messages they often get from their friends.

We live without prayer, or a community of faith. We don’t dress in our finest frocks and head to church on Sundays (for which our children are wildly grateful), and we don’t believe in fairy stories. We understand that Grimm’s tales, for example, are wonderful fiction and that Harry Potter books and movies are works of modern art. We teach our children that everything from Lord of the Rings to Shakespeare are fascinating and contain deep lessons about life and humanity.  We share our understanding of major world religions and what they believe. We discuss some of the best and worst aspects of them so they have a well-rounded choice when they are old enough to make one. We talk about living an ethical and honourable life, and the value of every human.

Where we struggle philosophically is with mythology versus real life. We wrestle with the idea of Santa, and for that matter the Easter Bunny and the Tooth Fairy. Remember, none of these entities are of any spiritual significance to us, they are simply what we do in society that feels normal and joyous. We also celebrate Diwali and whatever street party is happening in the neighbourhood of many cultures where we live.

Our struggle isn’t about a crisis of faith, it is about spinning fantasy for our children and expecting them to believe it. It was always hard to convincingly lie about where the money came from under the pillow and why some fairy would need to collect teeth. My exceptionally bright daughter asked on the event of her first baby tooth falling out: “What does she use the teeth for?” In my childhood, I was told the story of Baba Yaga who made her house of children’s bones and teeth after she had eaten them.  My parents never tried to tell me the crone was real, for the record.

As in the example of the Easter Bunny, we couldn’t make it square with the reason for the holiday. Instead, we gave a brief description of what some people believe. But the telling them we believe in a bunny hiding eggs and chocolate seemed to defy logic.  How is that more realistic somehow? It boggles the mind.

But the big lie was Santa. How naive must a child be to believe the hype of flying reindeer, elves in workshops and a naughty and nice list?  (Ok, we took advantage of the Santa threat once in a while because it was an effective behaviour enforcement tool.)  In the end, our daughter busted us at age four when she recognized my handwriting.

We went along with the myths like other families for a little while. After all, it was magical to see our children’s eyes light up in the morning when the cookies were gone and there were presents under the tree. We relished the egg and chocolate hunt with our kids as we ran from bush to tree in the yard. It was just fun and another excuse to celebrate.

One tradition we could not bring ourselves to participate in was the elf on the shelf December marathon. Posing a naughty elf every night and convincing little kids that he had pulled Barbie’s head off was too much for us. Do the monsters under the bed not terrify kids enough already?

The crux was this: We do not believe in a man in the sky who controls everything, but we then we expect children to believe that a fat guy in a red suit flies around the world on Christmas eve?  It beggars description to even try to be convincing with the lie.

It comes down to whether you believe in something you can’t see or understand. That is where the line is drawn for me. We didn’t continue the holiday mythologies for very long, just enough to get some cute pictures before they started asking probing questions. Frankly, it was a relief when we were able to end the deception. It just hadn’t felt right. We did, however, make the point that many of their friends thought differently about Santa, and it wasn’t their place to correct them. That is a message we have instilled in them on a number of other topics.

Living a secular life among religions of all sorts can be challenging because many people who should know better don’t remember the line in the bible:  Matthew 7  “Do not judge, or you too will be judged. For in the same way you judge others, you will be judged, and with the measure you use, it will be measured to you.”

We will just carry on celebrating everything that involves chocolate and family gatherings anyway; after all, there is nothing sweeter than love, is there? 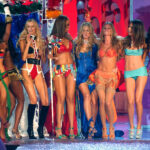 What Will I Do Now That The Victoria’s Secret Fashion Show is Cancelled? 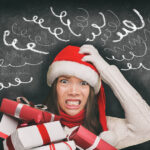 They Call Me Scrooge