You caught your pre-teen daughter in the middle of playing with some tarot cards. Or lighting candles with weird beads around them in her room. Maybe she’s in the middle of goofing off with a ouija board with her friends at a slumber party, and the host’s annoying, control freak mother Sarah is calling you up in a panic after the girls pass out in her finished basement after too much candy/Red Bull/conversing with Old Scratch Himself.

Well, first off, Sarah, why are the girls having a slumber party during a friggin’ pandemic? Who gives a shit about their eternal souls, they might be spreading COVID-19 to their grandmothers! Priorities, my dear, priorities. Jesus.

Regardless, the Horned One is back in the media, thanks to Lil Nas X making a music video in which his fabulous self rides a stripper pole to grind on the Devil hisself. Although, ironically enough, outside of the super religious folks Striesanding the hell out of this silly song, no one seems to care about the Devil or the many witches who exist to serve him.

How do I know this? Well, I got into witchcraft myself as a teen. Starting when I was about 12, and going until I was about 16, I grew interested in all of the trappings that generally scare Good Christian folk–I loved tarot cards, reading about Wicca, and filling my room with candles. I got into reading about spells, ancient societies, and how herbs were used as remedies for social and psychological ills. You can bet my girlfriends and I also played ‘light as a feather, stiff as a board’ and wiggled that ouija board around on many a slumber party in various bedrooms in 1990’s Chicago.

Clearly, I turned out okay*. Hell, I have a Ph.D, a 401k, and I even pay my taxes on time, on top of being a mother of two young girls myself. So clearly, getting into spooky stuff didn’t stop me from eventually becoming a latte-sipping, Lululemon wearing, basic bitch driving her Prius down the Eisenhower on any given Sunday.

But why would my bland Midwestern self turn to witchcraft when I started sixth grade? Did my parents not love me enough? Was I troubled enough to turn to the Dark Side?

Nope. Believe it or not, turning to witchcraft is not only fairly normal, but it’s also expected for girls to experiment with different concepts of spirituality and agency during a time when their bodies, minds, and social structure via peers change so drastically). And it’s not like witchcraft or the concept of communicating with spirits ever really left us, historic witch hunts be damned, literally. Why else would there be tarot card apps available on Google Play, altar sets available on Etsy, and the main seller of ouija boards is the same company that sells friggin’ Candy Land?!

Witchcraft, as we know it, isn’t the spooky and scary thing that scared so many folks throughout history. As an undergraduate at Berkeley, one of my anthropology professors explained it to us as a lecture (in an awesome class called, wonderfully, ‘Folklore, Witches, and Healing’). Many girls are drawn to powerful spiritual figures that give them both agency and assurance during an especially vulnerable period in their lives. It’s hard to find a time where anxiety and vulnerability hits a human being harder than early adolescence, which explains many historical instances of religious hysteria involving girls in this age (think the Salem witch trials, St Joan of Arc, and  the many hauntings chronicled by Ed and Lorraine Warren). Questions about whether you are normal and accepted by society for your body, your gender, your looks, everything, is all brought to a head with raging hormones, where you find yourself suffering from sudden and drastic changes in your growing body.

This is one of the reasons why kids are pushed into extra-curricular activities, hoping that maybe they’ll find something that gives them confidence during this tumultuous time in their development. But, let me ask you this: what’s more powerful–something your parents chose for you, or something you choose for yourself, in which you are empowered by generations of ancient people–especially women–that you can look to for guidance?

Letting your daughter dabble in witchcraft isn’t a sign you’re failing as a parent. Far from it. You’re letting her explore a social and historical concept that was, for all intents and purposes, about agency and female empowerment, where an individual has both control of themselves and confidence in both their identity and their gender.

If you look at many of the goddesses a lot of Wiccans regard, they’re usually rooted in the divine feminine–they’re badasses. And, quite frankly, there’s nothing more empowering than knowing a pissed off Queen of Heaven like Inanna, master of magic like Isis, or a fierce warrior like Brigid is behind them. And if it’s allowing them to connect to their peers, I’ll tell you–I think reading more about ancient goddesses and how people worshipped them did me a lot more good than spending time on social media worrying about my looks or whether or not people liked me.

Now that I think of it, a lot more of us should be practicing witchcraft these days. Give me a moment while I find my old tarot cards. I’ll be listening to Lil Nas X the whole time.

*= I did marry an atheist redheaded scientist from The South who makes good money, so I guess that’s pretty close to the Devil, right?”

About the author: Kristen Vogt Veggeberg is a disgruntled blond mom in an Urban Suburb (yes, it exists) who somehow manages to work and write despite living in a house with kids, cats, a Puerto Rican Street Dog, and a redheaded Texan husband who isn’t Willie Nelson. Please reach her/send her extra sunblock at Twitter (@DrKVeeVee) or Instagram (@KrisVeeVee).
1
Author Wannabee BLUNT 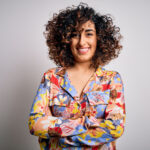 I Am Okay With Being Alone 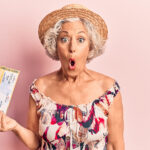 My trip to Cali