The Stomach Bug is an asshole. It busts into your house with no warning, assaults every family member in its path, and leaves you with nothing but a house filled with puke stained morning breath, piles of shitty laundry, and a small colony of hemorrhoids from days of violent diarrhea.

Be warned, the Stomach Bug is no joke, and there is no better way to describe this experience than channeling the five emotions from Disney’s Inside Out.

The first puke can occur anywhere, but wherever this magic happens, it is fucking messy and unexpected. As the first wave of impromptu puke hits the floor, you find yourself pulled in two different directions. Are you going to run into the burning building, or watch the disaster from the sidewalk? There is always a part of you that wants to shove your kid into the nearest corner until the first round of upchuck is done. But instead you instinctively run towards the danger and dive like a super hero in slow motion, willingly catching the chunks of vomit in our hands.  You are less concerned with your feverish child and instead focus on finding someone to blame. “Who the fuck did this?” you growl to yourself. You mentally rifle through everyone you have come in contact with over the past week, until you are able to narrow it down to that four-year-old bitch that licked your kid’s face at the playground. Though you are most likely incredibly wrong, you decide to forever hold a grudge against the probable suspect, and the next time you cross paths, you fully intend to throw several passive aggressive dirty looks at her mom.

You are forced to watch the infected struggle to stay awake as gallons of projectile vomit fill the mixing bowl you use to make pancakes. Your child will also show symptoms of wild diarrhea, leaving you with a seemingly impossible riddle to solve as your kid pukes and shits simultaneously all over the place. It is all very sad and unfortunate.  But let’s be honest, there is nothing that will be make you feel more terrible than the sadness you feel for yourself. As you lay awake on the couch watching shitty infomercials on mute, you can hear your husband snoring loudly from upstairs as he enjoys a solid cycle of REM sleep.  Why am I the chosen one? you think, as you listen for the heart stopping gags that foreshadow the next vomit.

Although you look and smell like shit, once you are deep into the pukefest, you settle comfortably into a robotic routine of reaction. But just as you start to become confident in your ability to catch and clean vomit so efficiently, you start to wonder how long this shitfest will last. You start to panic and the fear creeps in. Will you get sick too? Have you washed your hands enough? Did you swallow some of your kid’s spit on that last puke? It feels like you might have a stomachache. Are you getting sick or is this one of the Stomach Bug’s mind games? Who else in this house will get it? Is anyone safe? How can anyone be safe? No one’s safe. <Insert panic attack here.>

It’s been days, and the Stomach Bug shows no signs of leaving your house. You are completely grossed out by the puke-stained clothes and piles of soiled laundry. You have Lysol-ed the shit out of every surface but you are convinced that it still smells like rotten milk that has baked in the sun. Fuck you, you whisper to the Bug. You know it is listening. You are disgusted and can’t take it anymore. If the only way to get rid of this is to get infected, bring it on. You are ready to sacrifice yourself and your loved ones. Take me, Stomach Bug, take us all.

The day has finally come. You have either steered clear of the Stomach Bug due to some unknown force of black magic, or you spent a couple of days face down in the toilet bowl while shitting your pants. Whatever your fate may be, you have made it. Now that the Stomach Bug is gone, you are able to sleep without having night terrors about Hershey squirts and dry heaves. All who were infected are now able to drink water without hurling it into a bowl five minutes later, and some might even feel hungry and be able to keep down a few crackers. You are still super afraid of milk, and threaten your children each time that they beg for the beverage, “DO YOU WANT A BOO BOO IN YOUR BELLY?!” you shriek. Though you are tired, you are overcome by joy, and realize that the worst is over and maybe, one day soon your house won’t smell like shit. Things are looking up.

It’s been real, Stomach Bug. Until next time.

About the author: E.M. Ryan likes to think she is a super cool mom and writes about it on her blog Imacoolmom.com. She is a middle school math teacher by day and a comedic writer by night. She’s not afraid to Google her way through motherhood, and uses WebMD religiously to misdiagnose her two daughters. She has baby #3 on the way, cooks most family dinners in the microwave, and loves to do Zumba. You can follow her @emryancoolmom on Twitter. 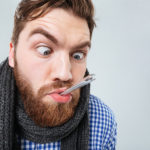 In Defense of the Man Cold 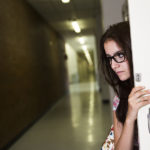 The Girl in the Yearbook