Whenever we move, I always have this idea that when we get to wherever we are going, I’ll turn myself into the type of woman that wears lipstick.

The type of woman that wears lipstick is, in my mind, a force of nature. She may be a florist or an engineer or a stay at home mom or a woman covered in tattoos or some blend of any of those and more, it doesn’t so much matter what she does but what she is. And the through line is this—she is: together.

So, every time we are gearing up to move again, I quietly tell myself that I will reinvent myself upon arrival. In theory, moving offers the chance to be someone new because there is no baseline to which others can compare me to. I can create that baseline with each new move. So I decide that I will be the type of woman that wears lipstick, as if the matte shades will be like Peter Parker’s spider bite, giving me super human powers—such as the discipline to daily floss my teeth. I will wake up early in the morning, before my kids, to meditate and run and shower and put on the lipstick. I will stop picking at my face and finally have smooth skin befitting of a woman in her 30’s rather than an angsty, pubescent complexion. I’ll wax my eyebrows. I’ll eat a breakfast that doesn’t consist of a few leftover mini wheats. The laundry will never pile up. I’ll know what I want and who I am and where I am going. I will not get tired. I will not have questions that I cannot answer. I will no longer end my days wondering what I did and if any of it mattered. I will have read the words and written the words. There will be order and I will be: together, at peace.

The very idea of a woman who wears lipstick is more intricate than I previously thought. Initially, I thought that lipstick lady was straightforward and one dimensional—she represents everything that is unattainable, she is a myth I am chasing, an image of perfection that I will never be. And large parts of her are exactly that. Part of her appeal is her flawless physicality and effortless state of being—she doesn’t get boob sweat or leave messages at the gynecologist and hang up in the middle of her nervous rambling because she forgot why she called, for example, whenever I envision her in my mind. She is always patient, always kind. She is bold and assertive and adventurous, unafraid to be heard and definitely unafraid to be seen. She doesn’t have debt or doubt or days spent bloated. She demands you look her in the eye. She wears matching bras and underwear. She is just the right blend of chic and smart. She is not plagued by wanting, by craving something she can’t even quite put her finger on. There is no fear or self loathing or self doubt and all questions disappear. It’s obvious that all of her edges are a little too smooth. In short, she is problematic because she is not quite human.

And yet, I want to be free from fear and self loathing and the type of woman that doesn’t tiptoe around what I really want to say for fear of being labeled unkindly, bitch. I want to be kinder more of the time. In a way, she embodies some of the ideals I aspire to…but without the cellulite (so yea, not real.) Further, her image conflates status and success with meaning and self worth with money, and thus this is where she really breaks down. As a character, she actually is one dimensional and an impossibility, but the idea of her is more complex and this complexity mirrors my own. The fact that she is problematic, thus flawed, is how we are most alike. At her core, she embodies the every present tension in my head between two seemingly contradictory truths: wanting to be better, to do better, while also accepting myself as I am, where I am, what I’m good at and what I’m not. It’s attempting to wrestle with the art of contentment without letting it slide into complacency. It is gratitude, wonder, empathy.

Cheryl Strayed always cuts to my core. She holds her imperfections and humanness with such tender hands. I imagine this was a scary paragraph to write:

“What if I forgave myself? I thought. What if I forgave myself even though I’d done something I shouldn’t have? What if I was a liar and a cheat and there was no excuse for what I’d done other than because it was what I wanted and needed to do? What if I was sorry, but if I could go back in time I wouldn’t do anything differently than I had done? What if I’d actually wanted to fuck every one of those men? What if heroin had taught me something? What is yes was the right answer instead of no? What if what made me do all those things everyone thought I shouldn’t have done was what also had got me here? What if I was never redeemed? What if I already was?” (Wild, Cheryl Strayed, p. 258)

Inevitably, I get to where I’m going and I spend a few weeks unpacking boxes in running tights and sports bras (hi boob sweat.) The first night is always a disaster; a vomit of random items everywhere to find a few blankets, a roll of toilet paper and maybe a box of cereal while Theo keeps asking where his legos are. Slowly we unfurl and I unpack the chaos and find homes for my books and we venture out into our new surroundings, my lips usually sans lipstick. What I’ve noticed is that, so far—though wherever we have been geographically has had an impact on who I have become and am becoming—it turns out that ultimately, wherever I go, there I am. I was in Raleigh, and Vancouver, and Chicago, and now I’m in Indiana, too.

I do want to be and do better, but to what end? The why is quietly sitting in the background, nudging me to question my motives. Maybe most of us who are so worried about not sliding into complacency should take that as evidence that we’re doing just fine. Mostly, I think I want to do better at not wanting—not wanting to be somewhere else, someone else, not wanting to be so together. The wanting is exhausting.

A friend once wrote to me: want what you already have. Maybe it’s ok to wear the lipstick I already have with the cellulite I’ll never get rid of. I do like bright colors, love a bold lip.

About the author: Cat Watson is the person writing this bio. Hi. I’m here for the stories. Story is queen. I blog at A Yellow Elephant where I write about books, movies, motherhood and being alive. I once read that we should speak our dreams into existence, so here’s one of mine: I hope to make a movie one day. Not living in Brooklyn, NY with my husband and our three kids. 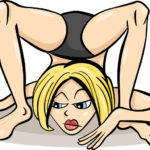 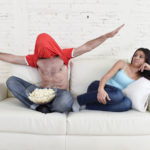