Disclaimer. Or warning. Or whatever…This post is all true. You may ask yourself after reading, “What the fa-huck?” but I assure you, this shit happened. Believe me, I couldn’t make this up if I tried.

Um. What the Hell is a titty bumper, you might ask?

A titty bumper is what my Mother in Law calls her boob.

Yep. I said boob. Only one.

That’s the first thing I (and most people for that matter) remember about the first time I had the pleasure of meeting Trish. And when I say “pleasure,” I’m using the term loosely. Very loosely.

To give you some history, before I met my wife, I had dated a lot of “upper crust” girls with parents that usually had expectations that were so high I usually had to stand on my tippy toes in my sad attempt to get their attention. Having had exposure to the mothers of the fancy girls before, I was a bit nervous when it came down to meeting my future Mother In Law. My wife just laughed at my nervousness and told me that it would definitely be “an experience.”

The day that I actually met Trish, I dressed up for the big meet. I may have been slack in the mouth when she walked…or should I say, kinda haphazardly, shuffled into the room.

She stood about five foot tall and weighed like a hundred pounds, maybe. Her wrinkled, leathery face had the appearance of that creepy little guy who guarded the ring in those Hobbit movies. Gilbert, or whatever the fuck his name is. Her hair was like Gilbert’s too. All thin and wispy, and she had it tied back into this pencil thin ponytail that stuck out the back of her head like a greasy 58 year old umbilical cord. Her eyes flashed with a mischievous glint…or it could have just been from the waft of alcohol and weed. Who knows. Looking back now, it was definitely the alcohol and weed.

I stick out my hand to shake hers, and she grabs it with her bony little fingers and cackles:

“So, Tom, you wanna see my titty bumper?”

Without waiting for an answer, she lets go of my hand, lifts up her shirt and gives me a full on view of her titty bumper. In the process, she also turns innocent bystanders into collateral damage.

Like a half naked train wreck, I couldn’t stop looking. It just hung there like a deflated, liver spotted football. As would become the norm for Trish, she seemed to enjoy my obvious disgust and discomfort, and gave it a couple of shakes before finally putting it away. Yeah. So, that’s forever etched in my mind.

Over the next hour or so, she smoked what seemed like a pack of those generic gas station brand cigarettes, hacking and coughing (usually right in my direction), and in her matter of fact tone she told me all about her battle with breast cancer. To say that this was one of the most surreal experiences of my life would have been the fucking understatement of the year.

Flash forward to our wedding (my wife and I, not me and Trish). Everything went smoothly. Trish didn’t act up, and thankfully, the titty bumper didn’t make any special appearances. My wife and I were so happy that Trish behaved herself and didn’t do anything to screw up the wedding (aside from drinking like 39 beers and telling my friend‘s husband that she could see his Pee-Tommy through his pants. Yes, you read that right. Trish refers to the penis as Pee-Tommy.) So, yeah, my wife and I were pretty happy…right up until we, and a bunch of other people, caught Trish squatting down in the middle of the parking lot, dress hiked up to her shoulders, peeing. My wife was mortified, but oddly enough, I just found myself wondering why she walked (read: zig-zagged and stumbled) all that way into the middle of the parking lot when she could’ve just used the bathroom at the reception place, which was, I don’t know…like 900 feet closer?

As if that wasn’t the grand finale, shortly after the wedding, Trish moved in with us.

Just take a minute and let that sink in.

In the year that she lived with us, she almost poisoned our two daughters by accidentally giving them raw chicken for lunch. Raw chicken. Not undercooked. Raw. Thank God the girls were old enough to realize that there was something just a bit off with their lunch, being all cold and slimy and whatnot. Then there was the time she damn near set the house on fire by creating a candle heavy shrine to her long dead father, the Green Coqui…the Green Frog. Needless to say she got plastered one night and caught the drapes on fire. And how could I forget the time I was doing yard work, and discovered the marijuana plant she was trying to grow by our banana tree. Finally, after about a year of this and a variety of other doddering hijinks, I snapped and told her that she had to go, and off she went, back to Miami to live with my wife’s sister, cursing me all the way.

Over the next few years, she moved around with my wife’s sister until they finally wound up moving closer to us.

Across the street to be exact.

Panic stricken by this, I immediately wanted to move as far away as possible, like Malaysia, but my wife convinced me it would be ok. Things would be different. And things were different. Trish still almost burned the house down, and tried growing weed in the yard, and fell off chairs, and pissed herself, and puked in the refrigerator, you know, all the usual things, but it was different because she wasn’t doing it in our house. My wife actually started having a better relationship with her, and Trish and I were starting to get along better too. She finally wasn’t trying to put Haitian voodoo curses on me as much any more.

The whole family of bliss was actually going pretty well, when my wife’s sister relocated her family, along with Trish, to California. This put the entire Pacific Coast on high alert for our tiny menace. My wife felt bad about the whole thing, and I have to admit, it was a little bitter-sweet. I realized I might finally have to shell out some money for a movie or something, instead of sitting outside and watching all the shenanigans across the street.

That brings us to recent times when we got the call from my wife’s sister, saying that Trish had been diagnosed with inoperable lung cancer that had spread to her brain, spine, and stomach. The docs said that even with treatment, the prognosis was grim. Knowing Trish’s lifestyle choices and previous run in with the cancer, none of us were surprised when we heard the news.

None of us besides Trish, that is.

For whatever reason, she refuses to believe that anything is wrong with her. She’s still smoking like a chimney and drinking like a fish.

Surprisingly, Trish recently got results back from her first round of chemo, and for whatever crazy reason, it seems to have worked. All the tumors have shrunk, some of them to the point they are almost undetectable. And aside from being a bit tired, she didn’t suffer through any side effects of the chemo. Maybe her body is just so used to all the chemicals and toxic shit constantly flowing through her veins it hardly noticed. Miracle? Blessing? Misdiagnosis? Who knows…maybe she is meaner than cancer. I’m guessing Heaven is afraid to take her and Hell’s afraid she’ll show up and start running the place.

When I think about her now, it’s usually with a smile on my face. Or in a fit of full blown laughter. Sure, she put us through some…um, difficult situations, but sometimes those make the most entertaining memories. If nothing else, the old woman is living this life on her terms, and when it is her time to go, I’m sure she’s gonna go bottle in hand, smoking up a storm, kicking and screaming all the way, until she gets to those pearly gates. 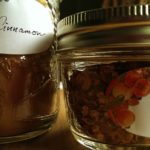 Being Organized! (Or, How Chef Michael Smith Destroyed My Kitchen) 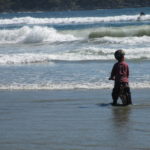