My husband and I agreed he would eventually have a vasectomy, since my gynecologist refused to prescribe me birth control pills after age 50.  While I navigated through my 40’s, he kept putting if off, probably anticipating I’d be in menopause. Nice try, but no such luck.

My husband’s vasectomy was scheduled for early December, 2012. He returned home from his appointment moaning and complaining that the doctor did something wrong. I had no sympathy.  Suck it up honey, it was a little snip, a couple of stitches and a few uncomfortable days. I handed him a bag of frozen peas and put on the bedroom TV.

We recognized there was a problem the next morning when one of his balls was the size of a grapefruit and transforming into a lovely shade of purple-black.  The bruising migrated down the inside of his leg.  A slight pang of guilt accompanied my panic as we phoned the doctor’s office. His doctor left us holding the bag, literally, of frozen peas as he had departed for a Caribbean vacation immediately after performing my husband’s procedure.

The doctor on call promptly saw my husband, officially diagnosing a vasectomy hematoma. Blood was collecting inside the scrotum caused by a cut to a blood vessel. His body would have to absorb the blood in its own time and additional trauma must be strictly avoided. Doctor’s orders included no lifting, bed rest, warm baths and anti-inflammatory medication. He offered no definitive time frame for recovery.

Any surgery has potential risks but who would think something like this could happen with a vasectomy? After some research I learned that while a vasectomy is a relatively ‘safe’ procedure, there are still some possible side effects.

Vasectomy Hematoma While a scant 1% of patients experience a vasectomy hematoma, from experience I can attest it is a nasty side effect. Blood accumulates inside the scrotum due to a cut to a blood vessel.  It can take from weeks to months to go away.

Infection As in all surgeries, there is always the risk of infection.

Sperm Granuloma Sperm can leak into the tissue causing a lump called a sperm granuloma. Usually not painful, it may go away with rest, however another surgery may be required to remove the lump.

Increased Risk of Prostate Cancer There currently is a debate as to whether or not a vasectomy results in higher incidence of prostate cancer.

The doctor ordered strict bed rest until after New Year’s Day with the exception of my husband’s weekly checkups.  We watched movies, cuddled in bed and feasted on comfort foods. The novelty of being together 24/7 abruptly ended as my man child, Mr. Micromanager emerged at the holidays’ conclusion.

‘The towel basket is overflowing, don’t you think you should wash them?”

‘Make sure you put a plastic glove on if you’re going to take out the garbage.’

‘What are you making for dinner, can you make some for my mother?’

After six weeks, my husband eased back into his work routine, while still maintaining his increased sexual appetite. His grapefruit sized ball gradually deflated to the size of a lemon for the next 5 months, before finally reverting to normal nut size, with no aesthetic damage. His friends urged him to sue the doctor for malpractice (he didn’t), although I considered suing his doctor for my ‘down’ time.  He still occasionally complains of discomfort to this day (Post Vasectomy Pain Syndrome), yet still retains his heightened sex drive.

Dolly Allen is a mom, wife and all around bad bitch. She swears like a trucker and enjoys yoga pants, wine, cooking and photography. She recently started a blog at http://yourqueenisin.blogspot.com/ and can be followed on Facebook at Dolly Allen, The Queen Is In or on Twitter @authordolly 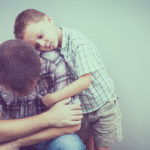 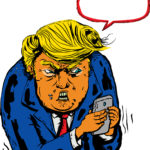 Covfefe and The Art of the Schoolyard Cover Up