When I was in high-school, I was far from belonging to the “in-crowd”.
Actually looking back, I’m not sure which “crowd” I belonged in; but I guess that I would say that I was just average. I was normal. I had a very small circle of friends that were in band and the other half that played sports (like myself) and I never got invited to the cool parties or asked out by the cool guys. I was just me. Now when you’re 17 and insecure and get zero attention from guys, you can almost believe that your life feels like it’s over.

I was the shy, quiet girl that kept to myself; I wasn’t into the party scene at all and in my high-school, that was the fastest way to be considered “cool.” I also wasn’t a sports all-star; I was mediocre (at best) at field-hockey and that was another sure way how to gain popularity. The point of it is: I didn’t really fit in to any clique and I hated high-school. Sure, there are some good memories that I recall but I despised those years so much that I didn’t even purchase my senior year-book.

So when my senior prom was approaching, I really wasn’t too gun-ho on attending. I was in a great relationship with a guy that graduated the previous year and my mind-set was just not focused on school anymore—if you’ve heard of Senioritis, well I had it bad. Yet somehow, I managed to get suckered into borrowing my friend’s sister’s old dress and fake-baking in a grungy tanning salon. I saved up some money from my supermarket job for fake nails and a $50 fancy hair-style and I just did the damn thing.
And I’m totally glad that I did.

I had the best time that night dancing the night away with my boyfriend and some friends as we clung onto tacky glowsticks and had leis around our necks. I remember how fast that night went and that I was happy for going.

My point is this: I wasn’t the “cool” girl and I had a shit-ton of insecurities. I had major anxiety over going to such a huge social gathering and I was afraid of wearing a beautiful dress that showed some skin because I was afraid of being judged or made fun of or who the hell knows. Looking back now, I’ll sit here and tell you that I’m so glad that I didn’t let those feelings win; I didn’t need to be super popular (whatever that even means) or to be dating the high-school quarterback—which I’m pretty sure he’s an alcoholic now. I went to my prom that night and had the best time with my soon to be husband and created some kick-ass memories.

So for any of the girls out there that feel “less than cool” and not worthy to attend prom—please go. You could have either the best time or it could be a shit show but at least you went and have that memory.

Bio:
I’m Laura and I live in Germany…it’s pretty neat here but I miss Target and general tso’s chicken. I’m a mom to two very energetic little boys that consume all my time and energy…not to mention sanity. I write at Excuse The Mess. I’ve been featured on Scary Mommy and BluntMoms and The Mighty. I enjoy adult conversation over some coffee or wine in my sweats. 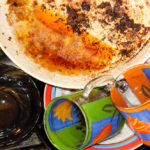 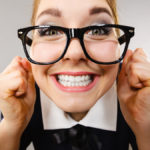 Welcome to Our First PTA Meeting Since We Armed Teachers