There isn’t an official code, no oath that you are expected to take when you become a mother. There could be, and there should be, but there isn’t one.

There’s an assumption, however, that a contract is in place between mother and child and many silent and spoken commitments are made by Mothers in lieu of one.

It is established early, maybe in utero, but for sure on the first exchange made loudly between a mother and her child as her final moans and her infant’s initial wails are joined: I’m yours.

There are more direct promises whispered in the tiny ears of tiny lives, from the minute they are at breast until they stop letting you hold them so close: “I love you, little one,” “You are safe with me, baby love,” “I’m your Momma, and I always will be.” There is a passionate fury ignited in her core when she meets what she has made and the vow echoes on repeat: I will do right by you.

“I will always love you,” is said with authenticity, even as Mothers experience the resistance and rejection that is only inevitable in their toddler, preschooler, school aged child, or adolescent. “I will always be there for you,” is repeated time and time again to reassure and comfort and install a sense of security that will promote confidence, growth, and independence in their child as they stride in to themselves.

There are hundreds of promises made by Mothers across the child’s lifespan, and ones spoken from a humbled and mesmerized state–ones sealed with tears of joy, of wonder, of frustration, and of fatigue- are the truth.

The oath may not be formalized, but it exists.

When Mothers receive the diagnosis, they don’t usually think about themselves first and ask “Why me?” or “What am I going to do?”. They often think first about their kids, the vows spoken when they were crouched over them, shaken, sobbing, and entranced after bringing them in to this world. They think about the many times they have renewed these vows to protect and love since and all the possible times they have yet to do more of the same.

Mothers don’t think about their age or that they are “too young.” They think about the lives that they created, witnessed, and nurtured; they think about how this illness could possibly threaten or age them–harm them. They measure the unfathomable possibility of their death by their children’s unrelenting need for them, reliance on them; their youth and continued dependency.

Mothers don’t often think about how they will endure the invasive tests, how they will withstand the treatments, or cope with the side effects. They minimize the gradual loss of “normal,” like their vanishing hair or the disappearance of body parts once used in a profoundly primal and life-giving way. They think more about how they can help their children comprehend, adjust, and reconcile their fatigue, symptoms, and changed appearance.

Mothers don’t often conceptualize their health trajectory in terms of how likely it is that they will survive. They don’t dare publicly acknowledge the fear in them that taunts them with the truth, and they don’t voluntarily make space in their consciousness to accept that this could be real, that this could be happening. There is no alternative to survival in the mind of a Mother; they cannot imagine leaving their children so young.

Until they have to.

Mothers come face-to-face with their prognosis head down, teeth clenched, and fists swinging as in a raunchy bar fight. They rage hard when they face ugly and unbeatable news; they yell and scream and smash reflections of themselves in the mirror infuriated that their body failed them and that their children are undeserving of the punishment that awaits. When they collapse and admit defeat and curse that they can no longer pretend, they don’t think about their prognosis in terms of how much time they have left but in terms of how much time they have left with their children and, most importantly, how much time their children have left with them.

They think about the magnitude of the injustice, how the children they were designed to protect will grieve a raw pain they would never have been exposed to, had she a choice. And because there is nothing left to do but lie, they make promises that they can no longer keep. They repeat their vows to themselves and to their babies and to their pillows and the sky. They sob their oath into the shoulders of their spouses and the chests of their friends and families, and to the wind. They whisper their affirmation to sleepy headed children still innocent and unaware that the dream will not come true.

To themselves, their family, and their children, they tell lies: I’ll take care of you, I’ll protect you, I’ll be there for you.

Heather was born a mom in 2009 but is still working out the kinks. She loves the CBC, aspartame beverages that are toxic and delicious, her profession, the 3 guys she shares a home with, and (sometimes) being a parent. A believer that moms are born too, she writes about her business because words make her happy and happy is good. 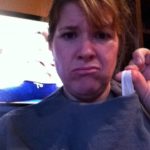