When it comes to being an adult, I like to think that there’s pretty much nothing that pisses me off more than going to the grocery store.

If you think I’m being dramatic, I don’t care– I would much rather wipe shitty asses, clean urine off my bathroom floor, or deal with my husband’s man flu (aka common cold) than to haul my two tiny terrors (aka my BLESSINGS) into a fucking grocery store.

It’s kind of funny though (or ironic) because when I was a kid, I would LOVE to go to the supermarket with my mom or dad. I would hang on the back of the shopping cart, pick out the best goodies like Dunkaroos and colored fruit juices shaped like barrels, and pull out as many coupons from those red coupon machines. It was bliss. I also loved to grab those teeny-tiny candies when mom was in the next aisle over and shove a few into my pocket for later. Spoiler-alert: that’s sort of illegal. Moving on.

Back to my point- I fucking hate grocery shopping. Like, I would much rather have a blind-folded Donald Trump give me a bikini-wax than play the risky game of “will my kids behave this grocery trip OR will it be full-blown out melt-down where each of them will leave the store with a chocolate bar and I’m sprinting to the liquor store?”

There is hardly anything cute or fun about taking a trip to a supermarket with toddlers. Heck, even when I go by myself it’s Hell. Once again, my faith in society gets lost when I realize how rude people are over a $1.99 CHIPS AHOY sale.

My most recent grocery store trip has brought out my inner-bitch and therefore, my pure-hatred for food shopping was restored. I put together a list of all the shit that annoys me when I make my weekly errand to the fiery pits of adult-hell.

The car shopping carts for kids.

The BIGGEST mistake I may have ever made in parenting was introducing my kids to those fucking car carts. Shit. It’s honestly the dumbest thing invited…AND MY KIDS LOVE IT. Why do I hate the car cart? For one, it’s too small, and when I load up my groceries I can barely steer the damn thing without knowing over a Charmin-Ultra display. My kids also fight over each-other’s steering wheels (BUT YOU HAVE YOUR OWN!!!) and so I have ten minutes before all Hell breaks loose in aisle five.

It’s not possible to just get in and out.

This is why grocery stores need to deliver… I HATE BROWSING YOUR DAMN AISLES!

Somehow, an innocent twenty-minute shopping trip easily can turn into an hour because I’m maneuvering that damn car cart, trying to dodge the cookie aisle, and I can’t find the tajin so Lord help me.

The never-ending begging from the tiny people.

Now that my oldest can communicate fairly well, he always points out stuff he wants at the grocery store. He will say please..I will say no…he will say please again…and whine and I will cave. I’ve gotten tired of constantly telling him no, so we agreed on “one treat per shopping visit” and that lasts for twenty seconds…until he sees a dog toy soccer ball and wants it. Good lord.

My realization that people are oblivious is mind-numbing.

I can be a real people-person….but if you’ve seen me in a grocery store, then probably not. My anxiety is at an all-time high when I’m food shopping and my kids aren’t the only humans that set it off. PEOPLE, FOR THE LOVE OF GOD, you do not need to stand in the middle of the aisle. Also, Alice, can you please let me squeeze in there to grab a box of Kraft? Your five-minute meandering over which flavor of cup o’ noodles you should get is a little overboard. Ffs people, get your shit together.

Stuff isn’t where it should be.

There has been too many times when my grocery store will move their shit around and I’m playing musical aisle trying to locate where the canned goods are. Talk about frustrating.

Most of the time, waiting in the check-out line can be just as worse as battling off my kids from the cookie aisle. There’s about 10 people behind me in line YET only ONE register is open. This is when the tiny people begin to melt-down because, bless their hearts, they don’t understand the concept of time and waiting. Self-checkout has become my BFF.

Ugh. Ultimate pet-peeve right here. MY CHICKEN DOES NOT GO IN WITH MY VEGETABLES. This should just be baggers-101 or something but I KNOW I’m not the only person that feels strongly over this. There’s also a very fine line of putting way too many canned items into ONE plastic bag OR putting one, single box of granola bars into a bag by itself. I don’t get it. Again, self-checkout. BFF.

Arguing with the self-checkout machine.

Ok. I know I said that the self-checkout and I were BFFs, but only up until the point when it repeatedly tells me to move my item to the bagging area. And that’s when I’m just a girl, standing in front of a self-checkout, yelling obscenities at a machine. asking it to give me a fuckin’ break.

As if dodging the cookie aisle, dealing with Alice the pokey puppy, and arguing with a damn machine isn’t enough stress for one day, well you still have to unload all the freaking shit you just bought. I’m near damn-exhaustion…and then it’s time to prepare the food that you just bought.

So take-out it is.

Laura has lived all around the world, recently moving from Europe to South Georgia. She's a Yankee, so don't expect her to say y'all. In her spare time of chasing her two energetic boys, Laura is a freelance writer, with her work featured on various platforms. Read more of her wit over on Medium, @laurabowerwriter. 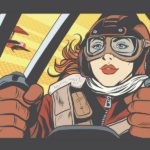 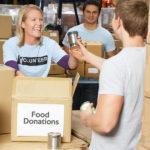