I have always been of the opinion that I should be able to take my children anywhere. I often chirp to my husband ‘Well, I have to take ours everywhere, so they might as well learn to behave!’ and in some way that’s true. My mum, dad and sister live over 300 miles away, so if my friends or sister and brother in law are unavailable, they do have to come with me. But as for learning to behave…we’re working on it.

This story is not one of those bad behaviour tales, it’s a story of such an obvious rookie mistake, and I still (still) blush when I think about it.

I had booked to have my smear test on one of my days off, it’s something I’ve always been really insistent not to put off. A close friend of mine had an awful scare and I have always made promises that I would never delay it once the letter came through. At the time, my son was 5 and at school, my daughters almost 3 and 18 months old.

I remember the thought process very clearly: Ugh, great. OK, well Monday is the best day to get it out of the way…little one is still really clingy, so she’ll have to come with me. If she comes on her own she’s likely to be shy and want to sit on my knee, but if her sister comes, they will just play with the toys in the doctor’s office and won’t be aware of what’s going on. Yes. That’s what we’ll do. Sometimes you’ve just got to take them with you!

In my infinite wisdom I decided not to wait until I had someone available to look after my girls during the appointment. We would all go together: it would be fine.

I could just end it there and let your imagination do the work, because it’s clearly going to end in disaster, yes?

I don’t know about your doctor’s office, but mine is always heaving on a Monday morning. So busy it is usually standing room only. But silent. Not one word is spoken between people, just sidling dirty looks that say: you don’t even look ill, she’s not limping, he hasn’t even got a cough! And so on. It’s a miserable place at the best of times but Monday morning is the worst. In the small ‘play area’ there is a play table with a Duplo board and four small chairs with a pile of books. Daughter 1 (we’ll call her The Talker) started asking a dozen questions at Church Volume (i.e. very loud). She wanted to know why we were there, which one of us was getting a jab, how long it would take, why the elderly lady across the aisle had a bandage above her eye… it went on. Daughter 2 (we’ll call her The Scraper) decided to best pass the long wait, by taking each one of the small plastic chairs and systematically dragging them from one side of the ‘play area’ to the other. And we all know what a lovely noise that makes and how well it would be received in a silent waiting room.

When my name was called, I actually thought the worst part was over (I am bitterly laughing as I type that…)

The nurse, quite used to these uncomfortable scenarios, quickly got the box of toys out of the cupboard and talked me through the procedure and we laughed about the indignities suffered by women, I felt fine.

She praised my good sense in wearing a skirt to preserve some sense of dignity and shut the curtain leaving my daughters playing quietly on the other side.

Out came the speculum and at this point I shut my eyes. After 3 children, countless internal examinations, stitches, you’d think I’d be immune to this sort of thing. The fact is; I hate it just as much as the very first time.

I shut my eyes like a child and waited for the ‘All done!’. At this point I opened my eyes to see the nurse standing, reassuring and professional. Just behind her, stood my 2 daughters, having crawled under the curtain, staring up through my legs in open mouthed horror. That moment seemed to last a lifetime, all I could think was why, why did I put myself through this? And WHEN will I learn?

I could not get out of that office fast enough.

Carrying The Scraper on my hip, dragging The Talker by the hand – she was understandably stunned into silence.

We had to walk through the silent waiting room yet again to get out of the surgery. It was even busier on the way out. People standing, waiting – every seat filled. Only someone entering or leaving the waiting room punctuated the glass eyed stares at the information screen. As we hurried through, just as we were in the centre of the room, The Scraper dropped a shoe; thud, everyone stared. At that perfectly timed opportune moment, The Talker piped up (at Church Volume, obviously) with:

‘But, why did you take your pants off Mummy?’

Every single pair of eyes, burning into us; I hurried us to the door flame red and getting hotter. As I grabbed the handle of the door, a lady (sat in a wheelchair next to the door) leaned towards me, with the most apologetic look I have ever had the misfortune to see:

‘Your skirt is tucked in your pants.’

(This post originally ran on What Mum Should Have Told Me.)

About the author: Alison is a thirty something former teacher who has given up her teaching position in a British school, to spend most of her days trying to get her youngest daughter to stop drawing on walls and attempting to eat cat food. She is a mum of 3 and wife of 1 – long suffering – husband. She is very good at getting into embarrassing scrapes with the help of her boy and two girls.
She writes at What Mum should have told me. She is also on Twitter and Facebook. 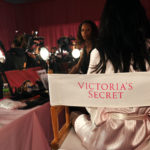 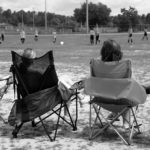 The 6 Most Painful Kids Sports Injuries… Suffered by Moms