I’m not going to pout or stress about the yearly naughty and nice lists. Who put the jolly man in red in charge of judging anyways? He shamelessly broadcasts his annual December 24th indiscretions kissing all those mommies underneath the mistletoes – poor Mrs. Claus holding down the fort in the North Pole and baking all those yummy cookies for her husband while he has multiple affairs with women all around the globe. Santa’s a player, but so what?

Yes, I’m calling out Santa but I’m kind-of-sort-of-bitter (not really), though it’s fact that I was good for so damn long and not one Christmas did Santa bring me what was on my list. I get it – Mark Wahlberg under my Christmas tree is a tall order.

2021 is the year I move on: “Dear Santa, Put me on whatever list you want – naughty or nice – it’s all subjective anyways. I’ll just hunt down Mark Wahlberg next time he’s in my city filming a movie because the cops didn’t let me into his trailer on the set of Daddy’s Home 2.”

No Christmas wish list writing for me. Instead, I’m ending the year with a different kind of writing list. Why? Because 2021 brought me another one of those instances where I ate my words. I said I’d never… And then, helmet and heels went on and off I went doing a four-decade-long, “Never” thing.

If riding on the back of a Harley deems me Naughty-List worthy, well, then, “Adios, Nice-List chicas!” (Except, I still do the nice-thing and leave cookies out for Santa because well, it’s a tradition that I can’t part with even though my son knows the North Pole’s truth).

Harley-riding included, here are some of the things that top my list for, “When life schooled me” – I said, “Never will I,” and life said, “Shut your trap, Woman! Let yourself be surprised; some of the best blessings and moments in life unfold in the unexpected and unplanned.”

1. Me growing up as a first-generation Greek-American: “I’ll never get divorced.”
Me at 33 (after three years in court): “I guess a divorced Greek woman isn’t a myth.”
On the never-getting-divorced thing, life, in a blindside, vehemently shoved my words in my mouth. But in doing so, the beauty of single motherhood unfolded from day one.

2. Me for 37 years: “I’m never getting a dog.”
Me at 38: “Happy 8th Birthday, my son! You’re getting a puppy!”
Well before the pandemic overtook planet Earth, our birthday pup was giving endless love, loyalty and joy to a boy and his mom. In parenthood, I always figured I’d be a, “fish mom.” Isn’t that some sort of right of passage for children on their way to adolescence – to have a pet fish and learn responsibility? Being a dog mom? Nope – never saw those four-legged cuddles coming but there I was in a village nestled in the northwestern mountains of Greece, hanging out with some chickens, cats and goats, making the decision to buy my son a dog after we returned home from our trip to see family in the Mediterranean.

3. Me all the years I believed in the fairytale type of romance: “There can never be a worse betrayal than cheating.”
Me when life took the rose-colored glasses off my eyes: “The worst type of betrayal is the one of indifference that leaves an innocent, dying woman behind.”

4. Me in my thirties: “I’ll never stop lovin’ on McDonald’s Filet-O-Fish sandwiches.”
Me in my forties: “I miss you, old friend, but I know I’m better off without the weekly indulge of greasy goodness. P.S. Don’t hate me for my other weekly indulgences.”
In full disclosure, if COVID didn’t exist, I’d probably still be lovin’ on those Filet-O-Fish sandwiches; the drive-thru was impeccably placed on the way from my first job to my second job. But the pandemic took my second job and in the global shutdown, I realized a single working mother’s superpower isn’t found in fishy fast food sandwiches.

5. Me for 40 years: “I’ll never ride on a motorcycle.”
Me at 41 (with hands in the air): “Wheeeeeee!”
Though COVID has changed some things, it’s nice to know it didn’t change life’s ability to school me in that, “Shut your trap, Woman!” type-of-way. Much of going for a ride on an iron horse has to do with trust; if you’re on the passenger seat of a Harley, you need to be able to trust the person sitting in front of you. Truth to be told, it’s infinitely better to receive the aforementioned blessing than to ever have had Santa fill the tall order of Mark Wahlberg.

About the author: Suzanna Parpos works in the field of education. She is a former newspaper columnist with compilations of her columns featured in her books: “A Year on Route 30: One Mom’s Collection of Essays” and “Awakening the Blank Canvas: A Collection of Essays Continues.” Suzanna lives in Framingham, Massachusetts, where she is known for the moon-shaped Greek cookies she bakes and delivers around the city, while wearing stilettos and her camouflage Red Sox baseball hat. Visit her site: www.suzannaparpos.com. 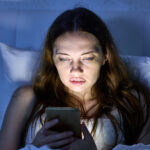