The homeland security officer locked eyes with me as he steadily advanced toward the very last aisle of the plane where I was seated. The other passengers on the flight craned their necks as he passed, hoping the plane’s take-off to Boston would still be on time.  I knew Mr. Homeland Security was coming for me and he knew I knew he was coming for me. As he frog-marched me off the plane, the pilot got on the loudspeaker to announce that the flight couldn’t leave until Homeland Security had dispensed with a “possible security threat.”  And, that security threat was me.

How did a 50-ish, generally polite female traveler, get tagged as a security threat?  Well, I blame it on Donald J. Trump.  I had the misfortune of being in London on business the same week Trump and his entourage were there last July. His secret service team had appropriated a number of hotel rooms across London, making it very hard to find available rooms in the City, much less anything at a reasonable rate.  Indeed, I’m convinced the Trump operation was indirectly responsible for my last 48 hours of hell in London.

I started my trip on a much happier note with a weekend in London before the business aspect of my trip kicked in.  For the next couple of days, I availed myself of the British rail system across the English countryside visiting various customers and staying the night in quaint bed and breakfasts. On my last day seeing customers, after struggling to balance my luggage in heels while running up and down train station stairs, I had a brainstorm.  Instead of hauling everything with me, I decided to check my baggage at the hotel I was checking into later that evening.

By the time I arrived back at the same hotel after a late dinner with my colleagues, it was close to midnight.  But I wasn’t worried – I had stayed in the same hotel over the weekend, I had a confirmed late-night check-in email, and had they had recognized me at the front desk when I left my bags earlier that day. All of the craziness surrounding Trump’s visit certainly wouldn’t affect me as I had booked my travel plans weeks in advance. At the front desk, I presented my luggage ticket, eagerly awaiting my key and king-size bed.

“Would you like a glass of champagne?” a black-clad woman materialized suddenly at my side.

“Umm, no,” I replied – I just want to get my room.”  My calves ached from running around in heels. My arms felt like leaden weights, and I was sniffling from a bug I was convinced I’d picked up from the recycled air on my flight to London earlier that week. Lowering myself on a concrete structure that bore some resemblance to a sofa, I waited.  There was much scurrying around and yet another black-clad manager offered me champagne and finally water.

“I just want my key,” I hissed as politely as I could.  “And my luggage.”  Out came my luggage but no key.

“I’m afraid there’s been a booking error,” the first black-clad manager apologized.  “We have no room for you.”

“But I have a guaranteed reservation,” I swiped madly at my phone, displaying my confirmation.

“I’m so sorry – we had this same problem with another couple.”

I didn’t care about the other couple or that there had clearly been a “booking error.”  After arguing for 20 minutes, the manager agreed to book me in another nearby hotel at their cost and called a taxi.

It was 2 am before I arrived at the next hotel. The staff had apparently been warned about me as a group of employees surrounded me as soon as I walked in. They checked me in quickly but pleaded ignorance about the first hotel paying the bill – which was considerably more expensive than the original room rate.

“I’m sorry we must take a card imprint or you can’t check in.”

Gritting my teeth, I surrendered my card. By the next day, my sniffles had morphed into a streaming nose and full-blown cough.  I slogged through my last meeting and vowed to fight the charges once I was home.

En route to Heathrow Airport, I tried several times to check into my Boston flight but finally gave up.  Once again, Donald Trump messed with me. At the airport, I got only so far in the automated check-in process before the “see agent” message popped up.

“Boarding pass,” the agent demanded as I finally made my way to the counter. “I don’t have one,” I sniffled.  After a Kafka-esque repeat of this sequence in three different lines, I was able to explain that the reason I was waiting in line was because I couldn’t seem to get a boarding pass on my own. At that point, the agent dealing with my reservation frowned slightly and said the words I’d come to dread.  “There’s been a booking error.”

“Noooooooooooo,” I moaned.  “This can’t be happening!”  In between coughing fits, I rasped I’d experienced a similar “booking error” at the hotel last night, and all I really wanted to do was go home.  Please. Now. I was banished to a small cluster of chairs where other disgruntled passengers were waiting – and not patiently.  The thought that they resembled an angry mob fleetingly crossed my brain before all went black. The next thing I knew, I was flat on my back and someone was trying to force orange juice down my throat.

“I think she’s coming around,” a voice said.

OMG, I’d fainted! My first thought as I sat up, was, “thank goodness I wasn’t wearing a dress so I had to worry about it riding up.”  My second thought was about the flight – had it left? No! Luckily, I’d only been out for a few minutes and one of the more athletic passengers had seen me start to sway and actually caught me so I didn’t bump my head or fall on another passenger.  I thanked my rescuer, trying to figure out how I’d fainted – hyperventilating from rage or stress?  By this time, I had certainly caught the attention of the gate agents who kept casting surreptitious glances my way.

One by one, the gate agent called my fellow passengers to the desk to claim a golden ticket or get rebooked on another flight.  As the group slowly dwindled until it was just me sitting on one of the plastic chairs, the agent finally called out my name. I was back on my original flight! I pumped the gate agent’s hand, spewing “thank yous,” checked my bag, and ran for security.  Because the airline granted me the very last seat in the very last row, I had to sprint on the plane during the “last call” broadcasts.

I hadn’t been in my seat five minutes when the PA intoned, “Passenger Washburn, please identify yourself.”  No way, I said to myself. I’m not leaving. No way, no how. Exactly two minutes later, my friend, the non-smiling Homeland Security Officer, made his way through the plane to my seat and personally escorted me off the plane where I was patted down in every place imaginable.  The officers seemed disappointed they didn’t find anything and finally waved me back on the plane.

As I settled myself back into my seat for takeoff, my seatmate politely asked me just why I had been deemed a security threat.  Not surprisingly, she seemed a bit concerned that I was back on the plane and sitting next to her. I noticed the couple across the aisle was also studiously avoiding eye contact and wasted no time in ordering drinks once we were underway.

It wasn’t until I was back in the US and experiencing difficulties checking into my next couple of flights a few weeks later, that I realized what had happened.  My “scene” at Heathrow airport had somehow been misconstrued as suspicious activity.  I was profiled. And, it was all Donald Trump’s fault.

Christine Washburn is a transplanted Midwesterner who began her career in politics working on Capitol Hill in Washington, D.C., as a press secretary to a congressman.  After meeting the love of her life in a movie theater, Christine moved to the Greater Boston area and now works as a marketing executive in the high-tech industry.  She is a guest blogger on “Grown and Flown” as well as other high-tech blog sites.  As the parent of a college sophomore, Christine copes with the trauma of being an empty nester by eating copious amounts of chocolate.
homeland securitytravel hell
0
Author Wannabee BLUNT 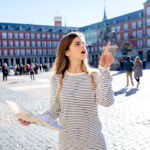 New Moms and College Freshmen are Basically the Same People 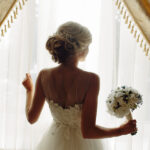 Why I Feel More Nervous About My Second Wedding